Hey guys, much like everyone else here I am an avid fan of Neo Scavenger.
I played the demo and bought the game rather quickly, played up until I stumbled on the wiki and found out all that I had seen was pretty much it at that point. But I wanted more.

As some of you know, .swf files are not open to modding, so that option isn't on the table (I already make art assets for Flash animation/interactive games so my original plan was to mod for my own experience).

If it is alright with everyone and Dan, I just want to use this thread as a depository for custom art assets, which are built in-line with the same aesthetics as the original stuff in the game.

(note; although they have backgrounds, the assets are actually on transparent backgrounds and sized the same as in-game items).

This is purely to raise this concept with everyone else and also illustrate some ideas that other people have put forward. I'm not taking a dig at anyone who has written a list or anything at all, mine is the same idea, but with the art to show how it might look in-game. Feel free to add suggestions or criticism.

To start it off here are some melee weapons; 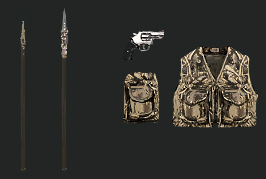 Then again that's how i think it would be crafted anyway i like the ideas hope Dan decides to add them :D

Actually, you hit a good subject on that, the idea of having sheathes or holsters would really tie in with that 'scavenger' look.

I think that there needs to be a lot of improvised/crafted low-grade items/weapons, these tend to really enforce the idea that you are either scraping by or have really completely adapted to your environment.

YOU SHOULD BE A DEVELOPER!!!!