DevKit gives modders a means to test their mods efficiently. Basically, you'll have everything needed to live, travel, and do with less interference.

Specific goals you need to fulfill to use the mod:

Thanks for your work on this mod. :)

I've installed mods before, EXE Patchwork m(onster)od is installed and working atm. Tried to install it but I didn't see the DevSauce or a recipe to make a coin. Any idea what might be the problem, I'm using the latest Steam build 1.14, iirc.

I'm looking into it right now, while i'm confirming this i have to ask 2 things:

1) if you started a new game? this only works with new games
2) did you confirm that you got Devkit working before you tried merging it?

#2 is a basic troubleshooting step that saves everyone headaches, just rename your current getmods to something else so you don't have to find it again/edit it again and get to work.

I've confirmed that DevKit works with Patchwork without any complications. You've done something wrong on your end. 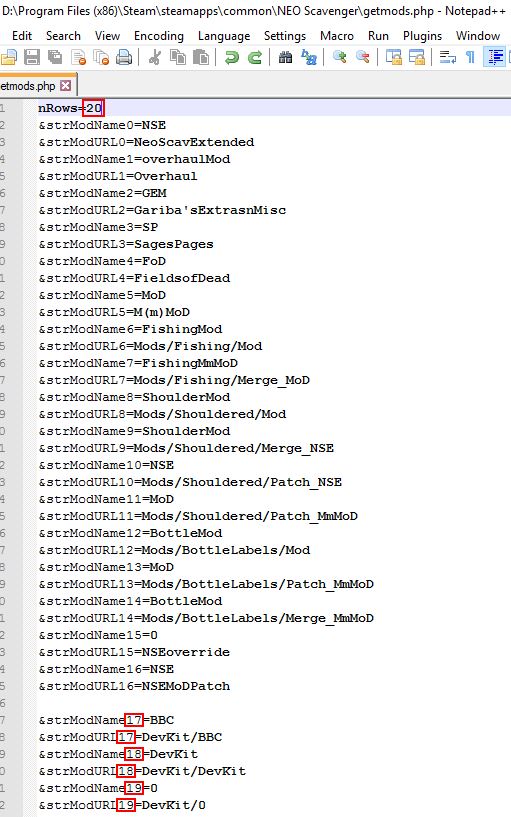 Then your folder containing NEOScavenger.exe should look like this 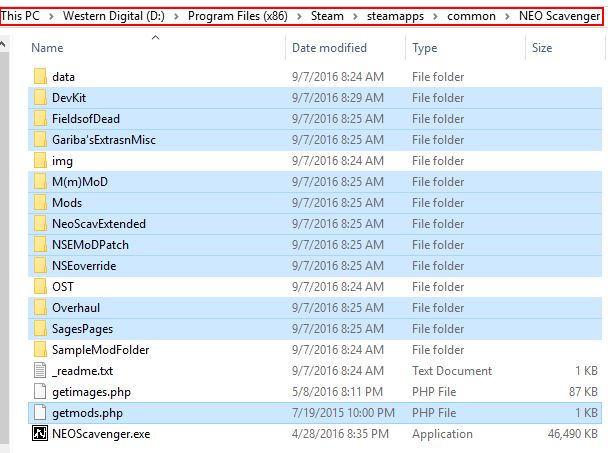 Thanks for your reply and help.

I just tried to install it stand alone, so yes I started a new game with just DevKit .021. The only reason I mentioned Patchwork was to show I could/knew how to install mods. I installed Patchwork, once I realized DevKit .021 was not working for me. Guess I should have been more clear, was probably half awake or half asleep att. I'll try it again.

Oh forgot to answer one of your questions directly, no never tried to merge anything with DevKit .021.

keep me posted, and if you figure it out lemme know what the problem was.

Is there a way to turn off time-lord (lots of moves left)?

yes, go back to the dev skill selection list and this time don't pick it.

"If you want to remove any of the abilities, then open the menu again and select "want". Then ignore the abilities and just hit spacebar."

did you get it to work?

am i able to put this mod on to Chiko's mod, i am trying and failing miserable:( please help me.

sorry for the late response, but here is my answer, a custom video that should tie up any loose ends.

Does anyone here 17 year here? Or forgotten the game? Mod is not working,do everything as instructed and the Devsauce missing. Game version is 1.15

Same! Devsauce doesn't show up when I open up the crafting menu, I already watched the install video and did every single step there.

Did you make sure devkit was in a "mods" folder? if you look at the getmods .xml you'll notice that devkit expects to be found in a folder called Mods, and then inside that folder is the Devkit folder.

i guess it's time i update the video. doing that right now, should be up very soon.

It seems i forgot to include the Mods folder in the .zip, and that is fixed now.

I can't add items from NSExtended. When i try to add items to the box, the game loads only up to 86% and stops there... I see 1 thing - this items have X.X (aTreasures) ID not X:X Id...can you teach youre mod read X.X?

Ok, if you read the other post before I deleted it then ignore it.

Load NSE BEFORE DevKit in the getmod file. Then study this image.

Hi,
Love the Devkit mod, tho can only get it working on new games.

The dev comments make it sound like it should be possible to use on a saved game.
Could anyone offer some help?

Followed the install instructions carefully and it runs flawlessly on new games.

When I say it doesn't work, I mean devsauce doesn't appear in crafting menu in saved games.

Respect to the creator!

in already existing games you won't get DevSauce, but you should be able to craft the necklace out of Twigs. 5 of them i think.

The necklace is what lets you activates the cheats, the twigs/or DevSauce are a means to craft the necklace.

Thank you for the help and the mod! :)

How to add foil to custom box or bbc ?

i may have an oversight onto how that works, so i'll have to fix that later, but...

Then this https://i.imgur.com/jFRkQwA.png and create a new treasure ID for it.

scroll all the way to the bottom and create a new block of code of the TreasureTable types and give it a matching ID number. Then add stuff to it.

Amazing, simply amazing. As BigBadCheater seemed to be getting further and further out of date, I was losing hope for another cheat mod :).

Any chance we can get Mega Human from BBC as well? It's not here for me.

if i remember correctly, adding that would force some changes to how the mod is handled in the background with OverRides that I don't want to implement.

Hey, I'm installing DevKit with MmMOD but even if I clean install Neo Scavenger, both mods, and then use the provided combined getmods file, DevKit won't work. And yes, I have DevKit inside a Mods folder,

and I haven't messed with getmods. But it still won't load. Devkit works on its own.

I can't seem to find the option to spawn the survival spawner 1 and 2 on the crafting panel. I'm running the mod with NSE and I followed the install steps.

Everything else works great! Nice job on the mod! 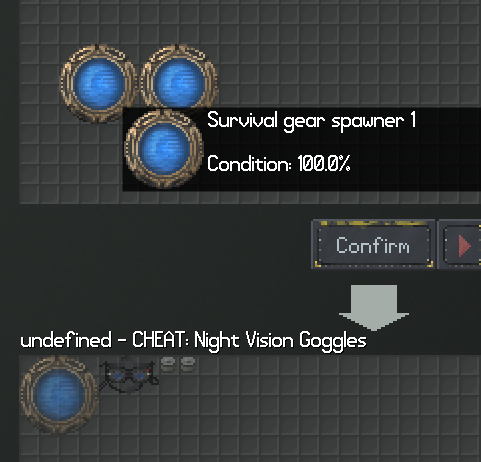 after crafting them they disappeared from view. exiting the craft scene and going back showed them where they ought to be.

but basically, I worked on my end with latest version of NSE

I started a new game and I managed to spawn the survival spawners. Apparently the crafting recipies break when you play the game on small GUI, forcing some of the recipies out of bounds and unavailable unless you change resolution. Thanks for the reply!

Is there a way to add new abilities beyond the 15-point Limit at the start and/or later in the game through the mod? If so, i haven't found it yet and would appreciate some help.

Edit: Maybe make the DevSauce Ability into a flaw that you can pick when starting a new game with a very high point value?

off the top of my head I don't think I'll be able to do that without breaking the original goal of the mod, keep it easy to merge.

Im a total noob in these modding things and I don't know how to add items for my character can you please explain to me like i have never ever touched a computer where I should add the text for items I don't know anything about it.

I don't fully understand the question, could you try explaining it again?

So ı don't know how to add items from devkit what should i do to get the items i want? I don't know which inputs to use for the items.

Maybe your asking how to get to the cools stuff.

Open your crafting menu and move the "devsauce" skill to your crafting window, you should see a necklace that you can craft. If not, try crafting the necklace from a twig.

so goal 1, craft the necklace. if you can't do that, consider that you installed the mod incorrectly.

goal 2, use the necklace. All you have to do it wear it around your neck, right-click on it, and click "Use". A menu should open up, and you should be able to figure things out from there.

Ok done that but there is only 3 options for me "want" "need" "everything" and i can only get the same items ( yukan bag, armor, shotgun etc...) How can ı get the items like foil poncho for example?

get the "cheater" skill and put it into the crafting window.

First time i did it did not register the "cheater" now it did and i feel stupid (when you say xml files i thought this is some deep modding) thank you.

the xml bit was for other mod writers that wanted their items to spawn in the cardboard box.

is this a spam bot? that signature looks suspicious.

Thank you for your help. I didn't realize I need to keep everything inside a mod folder because a lot of mods require me to scatter all individual mods around like a maniac. thanks for being considerate and keeping my folders less swamped!

bit.ly is down. I would like to try this mod. Can you please find hosting for it somewhere else? Thank you!

Thank you for reading this.

seems to be working on my end, try it again or check if something on your end blocked it.

In the deepest night , there's only shadow

you have to get into the map, after that you're handed a skill. from there you craft the skill into the dev necklace.