I think I've found a bug in the 1.14 Steam version. I switched to the camp screen and placed a noise trap and sleeping bag on the ground and they disappeared. Fortunately they still existed so I could move my mouse over the seemingly empty area and pick them up again. I made a copy of the save file but unfortunately when I restarted the game, the bug seemed to have also disappeared.

This might actually be an older bug I haven't been able to solve yet. Sometimes, the game will display dropped items in the top left corner, slightly off-screen until revisiting the hex (or reloading the game).

I forget if the mouseover tooltip still worked like you describe, but the rest of it sounds similar.

If you happen to notice this again, and can think of any other clues about what triggered it, let me know! As soon as I can figure out how to reproduce this bug reliably, I should be able to fix it.

Same happened to me.
Sometimes when you drag items to campsite inventory - they just disappear.

It feels like they drop 1 level below the camp.
You cannot see them - but you can hover them and pull out into area inventory, where they become visible again.
If you leave them as invisible in camp inventory and leave/reenter camp, or save/reload game, they will be gone for good.

Also camp alertness rating is not displayed anymore when I put traps, don't know why. Used to see it as soon as I put at least 1 trap. Could be connected to the problem, dunno.

This is indeed an older bug, but personally I've never seen it repeat 3 times over the same play session, despite reloading and also exiting and restarting the game. And yet it happened to me in two different games within the same hour. It does fix itself after reloading and/or restarting, but it seems to pop up again fairly soon after. And if reports of it are cropping up more often again, could the latest build have something to do with it?

Saves never seemed to help with this bug in the past, but here's hoping this one is different.

At least two of the times it happened right after killing a puppy, while attempting to transfer the spoils to the campsite by using "1" instead of drag&drop. You can barely see the items stacked in the top left corner when it happens, right over the main menu button. Version 1.14, clean install through steam. Also, just in case, I was using fullscreen + stretch (doubt that matters, but what do I know.)

Edit: Weird but potentially related. Just went back, another doggy came by, I started sending things into the campsite again without the bug surfacing this time, but look in the upper left corner. Can you see something that looks like a campsite icon there? 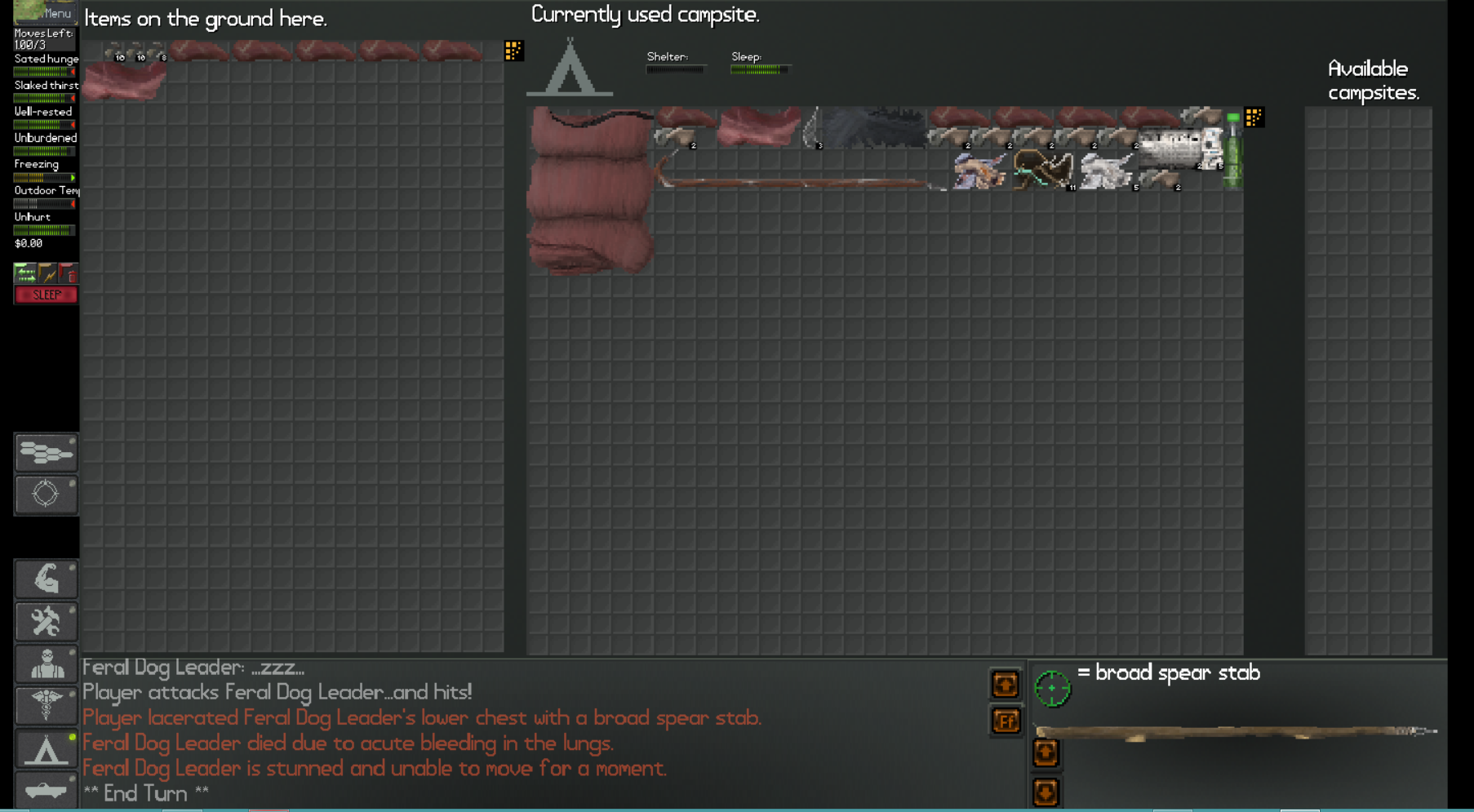 Edit 2: Okay, so there's something up. The same save about what, an hour later? The campsite icon kept reappearing at random moments over the menu screen, it seems to always be there when problems crop up. Combat and/or crafting seem to be consistently involved too. So a problem when inventory rearranges itself at campsites? In the end the game disappeared a travois (with all its items) from a campsite. First it was visible but not clickable/discoverable, I saved and reloaded and it was gone, exited and restarted and it was gone again, apparently for good. Didn't keep a second save, it either shows on the one I linked or not. Let's hope it does.

And... edit 3: Deleted game and saves, redownloaded from Steam a third time. A few paces from Cryo, fighting a Mutha, in the middle of the fight I reach into the campsite for the bag that has some extra stones - the bag isn't clickable and no tooltip, but see the campsite icon again in the upper left? I can click the menu, I can go on with my game, but the bag is as well as not there. Frankly I consider this game breaking by now. Autosave is on - but what would that have to do with campsites bugging out? 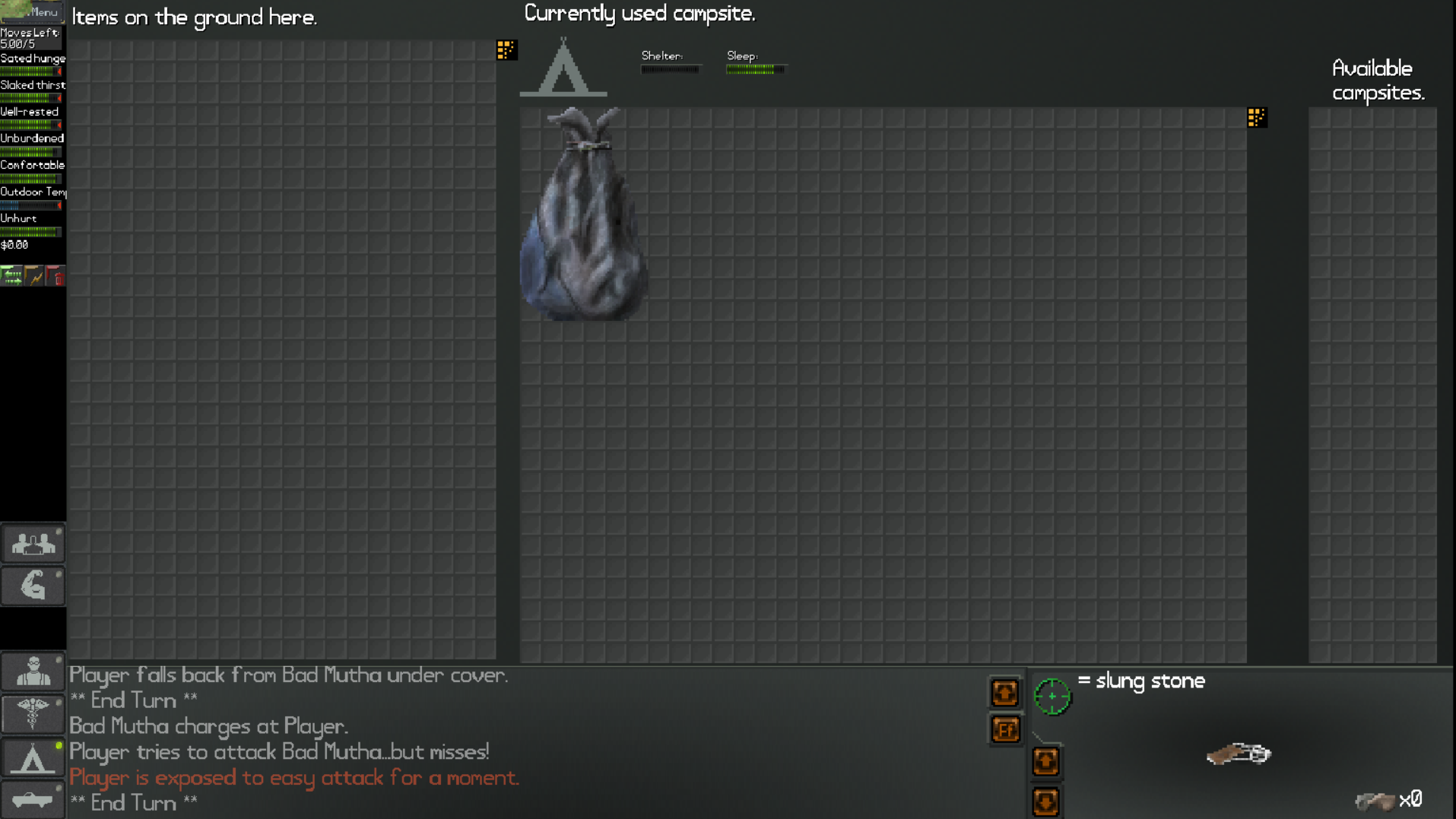 Just an update: I tested it today, the problem lies with autosave. Without it on, no problems whatsoever.

I wonder if this is the same bug.

If it isnt just a visual glitch, maybe? Does it cause items to disappear? Does toggling autosave off fix it?

I guess not. I tried exiting and reloading and the items were then in the correct place.

Same bug happens to me. Dragging items into campsite can cause items to disappear. If the tile has more than 1 campsite they might be visually displayed in another campsite of the same tile but cannot be dragged from there.

Saving and restoring can make items re-appear in correct campsite, but I have also lost items through it.

Try toggling autosave off, it's our likeliest culprit so far. Never saw the problem again after turning it off myself. If you see it happening again with autosave off then please do let us know. Would be useful to know if that hunch is off.

Thanks, linibot. Switched off autosave as well, no disappearing items since then.

OK, I think I have this issue, but despite some people saying this is a rare bug or it doesn't repeat several times through the same playthough, I constantly find myself placing items in a camp and then being unable to see them, yet being able to pick them up.

Now, there are two details that I didn't find above:
First, sometimes (if not always, I can't remember propery) once I dragged the invisible item to another spot in the same camping location, or to the ground, it goes invisible again, but I can no longer pick it up (as if there was nothing there at all. Nothing pops up when I hover it). Unless I do as detailed below.
Second: despite azusu saying that fi you leave the location and come back, your items will be gone, it is the entire opposite to me: once I can't hover the items (as detailed above), if I leave the area and go back in, I can find every singe item where I left it, being able to see them and move them around.

Something else I have noticed: I have found myself pressing R (openning camping screen) and quickly placing items into the camp, before noticing there is no camp image, but just the "tent" that usually is behind said image. If this is the case, it is almost surethat my items will disappear, as I said above, although this has happened to me before even where a camp is displayed in front of the "tent".

Not sure if this issue will be fixed the next time I execute the game, so tell me if a copy of my save file would be useful (and how to share it).

You can upload a save to any online service, like dropbox, gdrive or similar and share a link in the forums or even email it privately to the dev.

I went back to the game, and the bug didn't show up again. And my map was wiped off, another bug related to autosave for what I found in the forum. So it seems autosave is quite broken from my (and a lot of other users) experience, so we should shitch it off for a while until this issues are fixed.

Sorry for the issues with camp and save files! It's quite possible that autosave has a null pointer bug that appears sometimes, and this is causing the weird (and varied) issues in games where it is enabled. I've never been able to "catch it in the act," so-to-speak, but there are enough reports for me to agree that's the likely culprit.

For now, the best option is probably to switch it off. As part of the mobile edition, we're rebuilding the Flash engine in Haxe, and this might help fix (or at least reveal) the bug on PC, too. But it may be a little while before that's ready for prime time.

And if the Haxe version doesn't end up working on PC for some reason, I'll probably resume trying to patch the Flash version. But as above, that'll have to wait until we can verify if the Haxe works completely.

In any case, thanks for the info, and thanks linibot for the help!

Just wanted to say, I have experienced this bug as well (v1.14 from GOG).
I'll sadly try it without autosave (saved my hide when I accidentally clicked on destroy several times).

But could it possibly have something to do with memory? I know my laptop has problems with memory after a while and the bug seems to happen more frequently when the game is running for a while...

Anyways, Dan, great game, enjoying the shit out of it. :)

You reminded me that I had yet to update v1.14-v1.15 across all sites as the new "default" build. It was currently only setup as an opt-in beta on this site and Steam. Sorry about that!

GOG.com, Humble, Indie Game Stand, and this site are now up-to-date with v1.15, and Steam's opt-in will be promoted to production by the end of the day.

v1.15 should have the campsite fix, even with autosave enabled. The jury's still out on whether it also fixes save corruption w/autosave enabled, but so far, there have been fewer reports.

Let me know if that helps!