Hey Folks! Hope everyone had a good weekend. Ours was a bit stressful as we take in the mounting complexity of our upcoming move. It's going to involve a lot of traveling around to get government stuff setup, plus finding an apartment, new car (importation issues), etc. It could be a low-progress couple of months ahead...

Back in the dev world, there is fortunately better news. I figured out how to get Unity to load non-binarized data at runtime. Better yet, I managed to get it to load my JSON from the HaxeFlixel project!

As I mentioned last week, one of the problems I was having was to locate where I could put files that both the Editor and compiled app would see equally. And as it turns out, that's the StreamingAssets folder I alluded to last week.

"Didn't that fail," you ask? Yes, but I was doing it wrong. (Of course!) It turns out I can just have Unity tell me where that path points to, and then use standard C# file access methods. E.g. System.IO.File.ReadAllText()

Once I had that working, it was just a matter of reading my JSON format. And thankfully, there's a great library out there for this. It's called LitJSON, and so far, it "just works." Within minutes, I had it reading a json file, instantiating an object from its data, and writing it back out to a new json. Not bad!

There's still some concern about whether this will have cross-platform issues. Ostensibly, no, but I haven't tested anything outside of Windows yet.

Elsewhere in dev, I began setting up my triple-boot MacBook today. I say "began" because most of the day was eaten up by just downloading updates. Yosemite needed an update to El Capitain, because I've heard updating after a triple-boot setup may require reinstalling some EFI boot loaders.

Then, I downloaded a Windows 10 installation disk to a USB stick. I'm sort of hoping I can install that without buying it for a 30 day trial until I'm sure it works in triple-boot, but we'll have to see.

I had to download the Lubuntu iso and install that onto a USB. And unfortunately, doing so seems to have killed my first USB. I spent altogether too much time trying to salvage that, then just gave up and used a new one. So far, I think the new stick is working.

I also had to download Boot Camp's support files for Windows. This seemed to take an inordinately long amount of time, and I had to try a few times to find a stick that would fit it. (I eventually had to use the same stick as Win10, and hope it lives side-by-side in harmony.)

Finally, I have to do the song and dance where I start Boot Camp to install Win 10, interrupt it on the first reboot to partition a bunch of stuff and install Lubuntu, then let it reboot back into Windows to finish Boot Camp stuff.

So far, I've gotten to the Lubuntu installation's partition setup screen, but I bailed out. I need more time than I have left today to figure out what I need there. (E.g. swap partition, boot partition, other partitions?)

All this, of course, hoping I don't bork my MacBook. Of course, I think reinstalling a fresh OSX probably won't be bad if that happens. Especially since it's direct from Apple, unlike my last, second-hand MBP.

Tomorrow, I'll probably pick up where I left off with Lubuntu, then Win10, and see if I can get it to boot-select. Might need rEFit boot-loader on there, too.

And at the same time, I'll probably be trying to get the JSON-loaded objects to appear in the world in different positions and rotations, with different materials. Ideally, materials based on PNGs specified in the JSON, using some base Material type.

After looking at your post from friday I have to say forget about pixel art and go 3D.

And I would say, forget 3D

And I would say, forget 3D and go back to the sprites ;)

<--Mighty (mini)Mod of Doom-->
DeviantArt Gallery of MoD Sprites
Fooled you both! It's 2.5D

Seriously, though, it's good to hear long-term fans weigh-in on the topic. It helps to have familiar eyes to sanity check these kinds of decisions. I kind of have one foot in either camp right now, and I'm trying to figure out which way to go.

@Kaaven, what are your main concerns with going the 2.5D route? I know you had some concerns with the earlier glow/diffuse effects, which I think were about inconsistent visual style. (I.e. mixing a traditional pixel art with photo-real effects.) Were there any others?

@Malacodor, what about the Unity screens from Friday (Thursday?) appealed to you most?

Perhaps to help illustrate our discussion, I'll post a few visual styles below. If this prototype (or, say, the next NEO Scavenger) used any of the following styles, what would you like vs. dislike about each? (Ignore the different gameplay mechanics of each, as they're not so relevant to this question. Also, I'm not really considering side-view at this point. Just top-down or very close to it.) 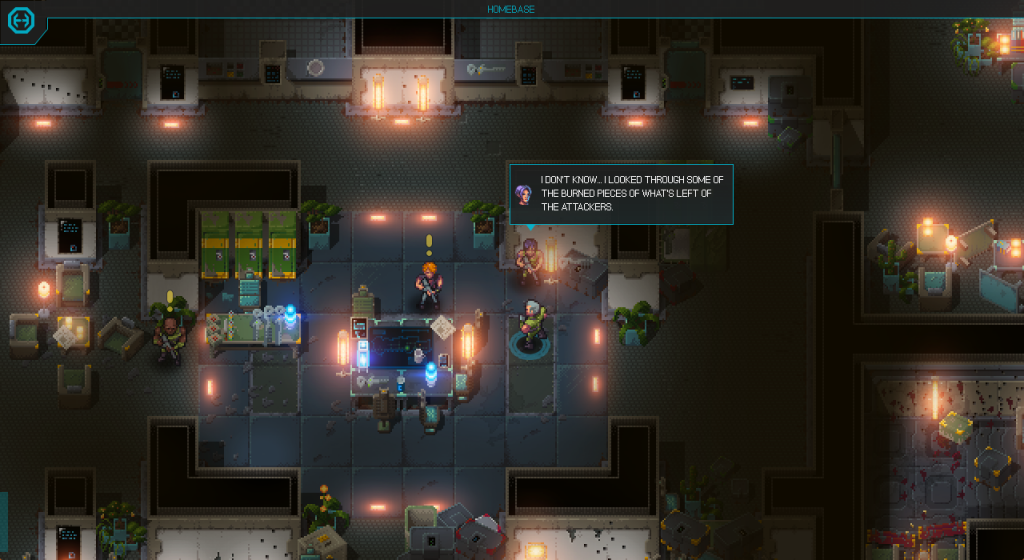 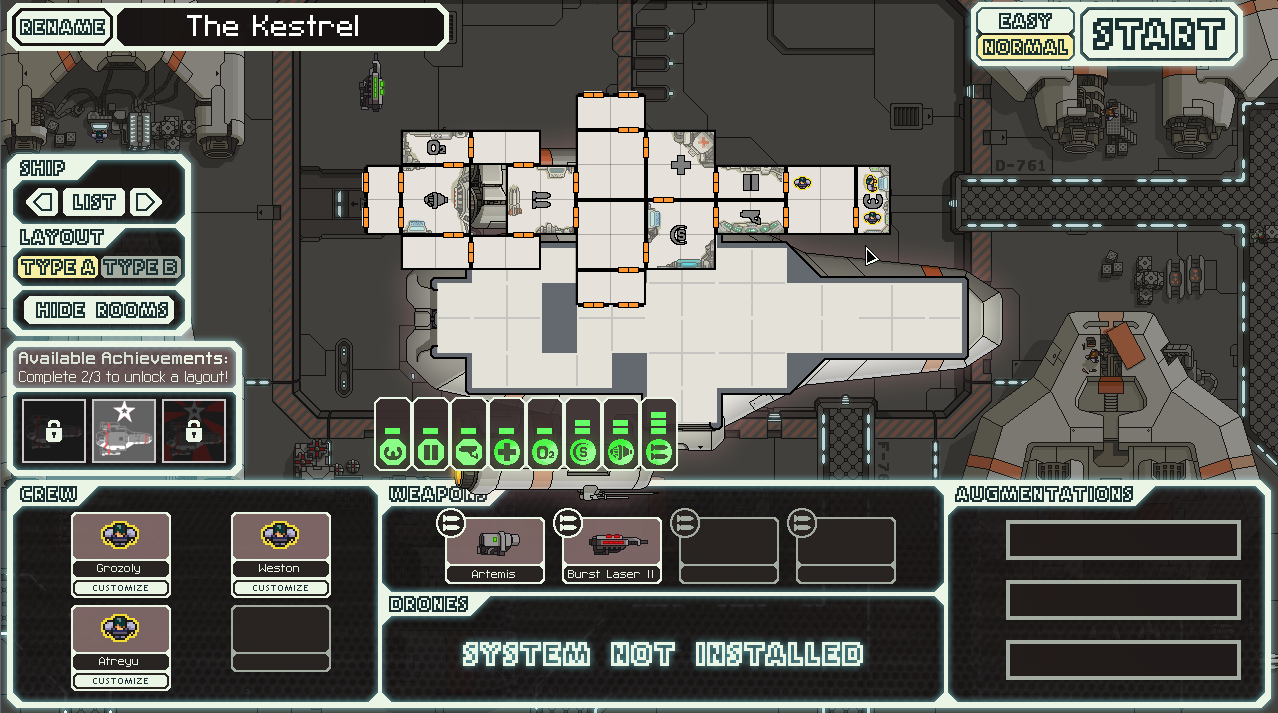 It's not an exhaustive list, mind you. Just a collection of touch-points I keep in mind when aiming for an art style.

OK, first to answer your

OK, first to answer your question - Primarily, it's what you said, the contrast between pixel art/low-res and high-res effects is an aesthetic I don't like too much and it is really noticeable and bothering for me. In the annoying way ;)

But on a more "meta" level (not pretending to be a specialist, of course), it says to me, that the author/graphical designer isn't really confident in his work. "I'm not sure the people will like my sprites... I know! Let's slap some colorful lazy filters on top of it! The peasantry loves flashing colors, right?" kind of way ;) Not trying to say you or any other author actually thinks and does that, mind you, it's just the feeling I get from that kind of style mix.

The 2.5D, btw, isn't inherently bad in my book. I would still prefer the consistent art-style, over such hybrid, more time consuming (on yours, the developer, part, of course) thing, which looks like some more window-dressing. But yeah, my answer was more towards Malacodor - if the choice was to be made, I would not spend a second considering 3D over 2D.

Now, to the games/styles below. And before anyone says so - I know I'm no artist or critic. Those are just my thoughts.

Megasphere - simply doesn't look good to me, for some reason. I cannot say what half of the things on that screen even are...

Galactic Princess - it's meh/OK. Either someone out there REALLY likes his anti-aliasing or there is some problem with the scaling since it looks kinda blurry, but whatever. Not bad, especially since, on this screen at least, they didn't went overboard with those lights.

Wayward Terran Frontier - this is an interesting case. The inside of the ship looks really, really neat! Futuristic and "frosty". The background is a bit distracting and a little bit more color would not hurt, but I can see myself spending a lot of time fiddling with those designs ;) But the "outside" battles... I really don't know what to say. Looks like someone cut the ships from one game and pasted them to the backgrounds from another one...

FTL - it's over-simplistic, but I guess that is what they went for. It's not "nice" but utilitarian and just OK. Perfect when the graphics are simply not meant to be in a way of the mechanics.

RIOT - had to go to see more screens. I like the sprites but, again, animated parts and static backgrounds are drawn in different style and don't fit together too well. The smoke - if you would not point it out, I would probably not see it ;)

Halfway - I really love the artstyle! The sprites are pretty and colorful, without being ostentatious, and I know what everything is. They are in the right size/resolution too, so they are detailed but still leave enough to imagination. But if I would get my hands on the person who placed those lights there, I would literally beat them up to death with a gigantic, rubber... chicken. It literally looks as if they had all the graphics already done and packed for shipping (notice shadows being part of sprites of some furniture) but then some corporate exec came and said - "Hold on! That does not look as modern as the other games! Change it!" and so they added those hideous lighting effects ;)

A lot of the styles above may look interesting, but I think you're right about some of them being busy or confusing. The Megasphere screen I chose probably wasn't the best, but I'd agree it can be hard to tell what's going on.

And on the other end of the spectrum, FTL and Halfway are probably the easiest to parse.

The WTF ship layout screen is indeed interesting, but I find it a bit busy, as well. I think it could use a bit more contrast, whether it be color, texture (i.e. smooth vs. rough), or other cues to make interactive and walkable stuff stand out.

I'm also not sure I like how crisp the art is. For better or worse, I tend to like fatter pixels :)