Yesterday's skill overhaul proposal garnered some really useful feedback. As you'll see if you read the comments, I was trying too hard to make the skill system fit into the item/container paradigm, and was unnecessarily complicating things. (Not to mention, cutting off some customizability.)

So taking that feedback into account, I revised the new skill system to be point-based instead of size-based:

In this new system, both skills and traits are items that go into spaces, and the player simply has to make sure they balance their skills against traits. Each skill/trait has a cost, indicated by dots in the corner of the sprite. The total cost of chosen skills cannot exceed the total cost of traits chosen, or else the Confirm button will produce warning saying so in the message area.

I also decided to highlight the Skill Total in green when the total is okay, and orange when it's too high, for convenience.

One other change was that I made the "Basic Human" traits into "Default," and each of them are worth 5 points. The player starts with 3, which should produce an average number of skills in the new point-based system.

This new approach should be a bit easier to understand. What's more, it also allows a wider variety of builds than yesterday's size-based system (such as all negative trait builds).

So far, I think it's a good way to go, and agree with yesterday's feedback. Let me know what you think!

That looks good and I like the fit to the design.

Personally I like this system more.(But screen has only 2 "Default" traits when we were promised 3! (LIES! LIES AND CORRUPTION!!!) ಥ_ಥ)

Maybe instead of default trait just start counter at preset value(15 in our case)? The value could be changeable either in xml or settings menu.(better in xml of course)

Also since you working on skill system overhaul, previously I have tried creating an extended bionics mod. The main idea was to add activate-able bionics. Sadly skills could not be activated(in intuitive manner that is), consume or provide charges or do other fun stuff. Would it be possible to make skills and/or traits at least activate-able (in the style of opening/closing laptops or turning on/off flashlight)? If it won't take much time of course.

That 3rd Default must be

That 3rd Default must be hiding beyond the left border. I agree with you, the Trait value should just have the Defaults automatically applied, with the value showing Y + 15.

I love that layout, Dan, much cleaner, and I especially love the point values being shown in the upper-right of each item at a glance. Hopefully I can mod in oodles of skills/traits once you're able to code in scrollable windows.

That second line in Traits could be worded a bit smoother. Like:

[These will allow more skills, but beware: they come with disadvantages.] "Allow" instead of "buy" makes the skill/trait relationship more distinct, and the colon emphasizes the danger.

That looks cleaner, alright. Also, keeping things unified in both looks and works, this makes things easier for the future modders - with size/containers system from yesterday, adding more skills/traits could easily break the system balance. Point base character generation is better looking, easier to grasp and much easier to balance properly.

I didn't get a chance to comment before, but I had gotten a glimpse, and I have to agree, this one looks much nicer in comparison.

Perhaps instead of "Default" you could call it "Freebie" or something similar?

Also, to help make it visually obvious on what goes where, perhaps "Chosen Skills" should appear as though in a blue container, while "Chosen Traits" should appear in a red container? That, or perhaps tint their respective grids those colors?

Alternatively, you could arrange the Chosen grids to be in a horizontal row aligned with the grid with their available skills/traits. ex:

Your mention of window

Your mention of window placement gave me another idea for a mockup: 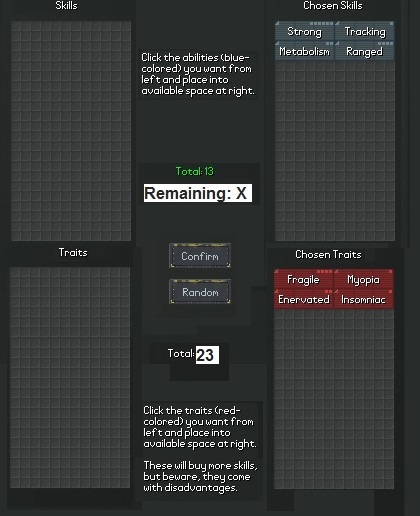 In the current build, after the initial loadout has been chosen, they're positioned quite off-center. This layout allows the chosen skills/traits windows to sit in the center.

I added a "Remaining" spot so that the player can check their open slots at a glance.

Note the removal of the Default trait and the automatic addition of the freebie slots to total trait value (8 from traits + 15 freebies = 23 total).

Lastly, I condensed the "critical information area": the skill and trait totals are closer to each other, and the Confirm and Random buttons are positioned between them.

EDIT: I just noticed now that the Remaining spot should show 10, but I'm too lazy to make another imgur upload. Sorry about that!

Why are you insisting on

Why are you insisting on keeping "Default" traits? They're confusing and pointless (heh). Just give the player some free points and allow to start the game when they still have points to spend (you can give a warning that they're forfeiting them for good).

wow, its looking real good. I

I agree with some of the

I agree with some of the comments that default looks a bit weird, but the idea of picking free points doesn't sound right to me either.

I like all negative builds being possible. ;) I'm also happy that this focuses on efficiency and openness. Plus, I get it straight away just by looking at it. I mean I suppose it could be tweaked a bit for visual clarity, and I wish we had a new player or 5 to test this on for initial reactions, but still, as it is know I think most players will easily get what they're supposed / allowed to do. Looking forward to trying it.

NEO Scavenger: FAQ
10 Ways (not) to Die - A beginner's guide
Stay ConnectedStay up to date with the latest releases, media reports, and game updates.