With the latest test build up, I'm waiting to see if it has any stability issues before making it the default build. In the meantime, I'm continuing my investigations into skill rebalancing.

Previously, you might remember me talking about relative skill and trait costs. In that system, each skill and trait would have a different value in the game, so I want to see if I can reflect that in the skill select screen. I had a spark of inspiration today, and here's a rough draft:

One thing you'll notice right away is that I flipped the relationship between skills and traits. Instead of traits containing skills, I reversed it. Why? Well, as some of you pointed out, variable trait size might cause situations where there is wasted space. E.g. you might have two extra spaces in your "Feeble" trait, and choose an additional small trait to add 2 more spaces. If traits are containers, this new space cannot be combined with the leftover space in "Feeble," causing you to have two sets of 2 spaces, instead of a big set of 4 spaces.

If we flip the skill/trait relationship, this problem diminishes. You choose the skill first, and "pay" for it by filling it with traits. And if we break up the "basic human" freebies into smaller "filler" traits, we should be able to support any build the player wants. (There is one build I can think of that won't work, and that's if the player chooses all the "small" skills. There aren't enough free skill points to buy that loadout, and the big traits won't fit.)

Also, it's pretty ugly :) I'm not sure what the best way to represent skills, traits, and free points might be. I considered making the traits look like electricity or something, so it was like we were "charging" skills until they were full. But I didn't want that to be too confusing with electronic items.

If you've seen good ways of representing this type of system, let me know. And as always, I'm open to feedback on the idea!

The only similar system I can

That looks okay, but it

That looks okay, but it prevents a "crippled" playthrough (i.e., taking ONLY negatives and 0 positives) for super-hardcore challenge-seekers.

I've been looking at Project Zomboid's point system for skills and traits, and made a mockup of my suggestion: 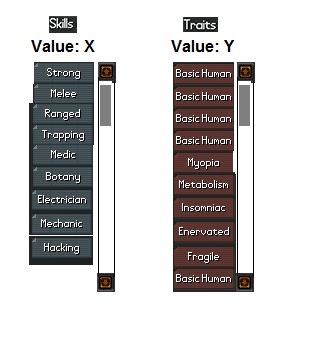 "Total skill value cannot exceed total trait value." Each item's tooltip shows its individual value, and the X and Y represent the total of each category. I also made a mockup of a scroll function using the current attack selection arrows. Mousewheel functionality would also be recommended when the pointer is inside the skill/trait windows.

Looks neat, I'd add skill costs right beside them though: "Lockpicking (+2)" and "Myopia (-1)" so you don't have to read the tooltip text if you already know what it does. And then I'd add "points remaining" somewhere. Basically, yeah, just steal from Project Zomboid, it has a very intuitive and fluent character creation system. Here's how it looks:
http://media.postdesk.com/wp-content/uploads/2011/11/CharacterCreation.png

Also get rid of basic human traits altogether, just give some points to the player to begin with.

You guys may be right: I

You guys may be right: I might be trying too hard to shoehorn this skill system into the slot/container paradigm. I liked that it was a quick tutorial in how the inventory system worked. However, it might be making things more complex than necessary (and more limited in utility, as you point out).

And yeah, the "basic human" is going away in favor of free points. "Human" has implied to many players that there might be more options for race in the future. But the reality is that I barely cover the human experience as it is, let alone offering other races.

It kinda still looks confusing to me to be perfectly honest. ;) And I was just wondering whether the slots as they are now are helpful to this system. What I was imagining when you were describing the system back in the day went something like this: A box of tiles, free skills fitting inside the initial box, traits allowing you to make the box bigger by a set number of tiles.

Anyway, what I really wanted to write was this: Assigning relative cost to skills and traits is going to be an improvement to the game, especially since as you say it still allows variable builds. However, the visual representation of the system shouldn't be more complicated than (PLUS shouldn't distract from) the "strategic considerations" of making a new build. If it does, than maybe just old fashioned numbers will do, you know? This is the first thing a new player sees when coming in to your game (a game that will already ask a lot of them once they are in). This is also a system that will be only used once in every game. It needs to be simple, self explanatory and easy to use. It needs to allow you to spent more time thinking which are good skills and traits for the build you are making, and less trying to "fit things in". Again, my concerns might be unnecessary, as I really am just not getting it yet. And anyway, if I'm being unfair I boldly take no responsibility, as I'm fighting a cold and am currently high on painkillers and pseudoephedrine. ;) Good luck figuring it out. :)

EDIT: Huh, I had the reply window opened too long, it appears you ninjaed me with some of my thoughts. Pseudoephedrine for the win! ;)

Ninja'ed or not, I agree - the first screen that players see needs to be inviting and should be as easy to grasp as possible.

Basically, you just need one "character" container for both abilities and traits, with a "Points remaining" total attached to it. It starts off with some default number of points, adding abilities decreases the points remaining and adding traits increases the points remaining. If the points remaining is ever negative, the "Confirm" button should be disabled until it becomes non-negative again. Just note somewhere that the sizes of the abilities and traits correspond to the number of points that they're worth (you probably should include that number in a tooltip with the ability/trait's description when you hover over it), and that the red ones give you more "skill points", though they give you a disadvantage in return.

Clearly indicating how many skill points are remaining, and that you can drag the abilities and traits over to the "character" container to spend those points, should show clearly what you're doing and make it simple to work with.