This is what happens when too many effects are applied in a small GUI: 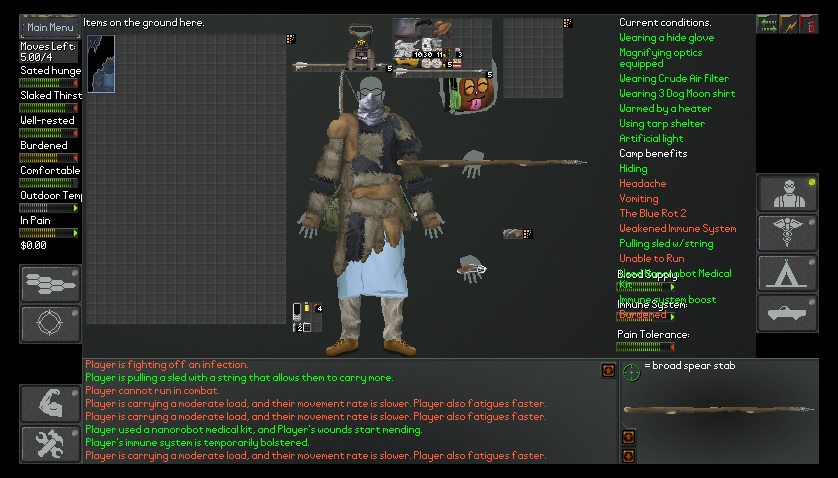 Any chance of creating a scrollable effect window?

Typos in the DMC Gate event:

Isn't the idiom "the glint in someone's eyes"?

If 'maquillage' is a synonym for 'makeup', then shouldn't that part be phrased [there's heavy maquillage]?

>[...] armed guards watch over the street [in] missing sections of the building.

People watch over 'from' somewhere, right? So, [watch over the street from missing sections]?

[He], since it's the start of the dialogue?

>[...] any fixer worth his salt is really careful who he contracts for work.

My suggestion: [any fixer worth his salt would be careful with whom he contracts for work.]

[*you*.] I get the emphasis on the pronoun, but maybe the punctuation shouldn't be part of it.

Wasn't he already looking up at the player pre-choice? Suggestion: [and his glance sparks with interest.]

A hypothesis should utilize [were].

Also, typo in the "oral [innoculate]" Blue Rot cure. Should be [inoculate].

Have Blue Frog Sash. Equip to face, which is already equipped with a gas mask and clean rag. Sash disappears?

Have Blue Rot 3. Save + reload 48 hours (2 turns) later. Live another 72 hours. Blue Rot 3 still persists? Has it gone inactive and made me a carrier?

Have Severe Burns condition (took Trial of Fire from Saginaw). Use Nanorobot Kit. Sleep a bit. No change in status?

Go through Saginaw encounter to get the Blue Rot cure. Talk with King Elias once to trigger his dialogue. Try to talk with him again on a later turn. Elias also offers to talk to me, but there's no dialogue; it just skips straight to the map after combat.

Eventually died from the Blue Rot, a bit over a week AFTER taking the inoculate.

Here's the pastebin of my run: http://pastebin.com/UAHRE68p

After killing an enemy I noticed this:
https://dl.dropboxusercontent.com/u/6917736/WeirdStick.PNG
This stick in the top corner seems misplaced.

This seems to be a recurring issue. Hitting the sort button serves as a workaround for the moment, though I'm curious as to what seems to be causing it.

I found an item miss-named, but I don't know how to put the image in the text like I see in some comments. How does one do that?

For now I'll just say, it's an item I found on a drop, from a fight between 2 NPCs or something. I wasn't there, I just stumbled over it. It looked and behaved like a shotgun(took slugs as ammo) but was named a "hunting rifle." All I can say is it wasn't one of the black, compact looking ones the DMC sometimes use. I have the image saved if someone could show me how to share it here.

Upload to imgur, then paste the forum code to your post.

You don't need an account to upload to imgur, at least. What, your web searching skills got rusty?

My guess is, you don't have the Ranged skill. When your character does not have skill necessary to correctly identify certain items, he will call them by colloquial, not always accurate name. In case of shotgun, he will call it a hunting rifle. Similarly, you can notice that he cannot correctly name ammo types and calls all of it "some bullets".

(thumps head) Why didn't I think of that?

Wanderer of the Wasteland

Did you place the laptop in your hand so that you could fiddle with the file stack? You can hold Shift and move each file from the stack to an open space.

You also need to put the USB in your other hand so that you can move the software to the powered laptop.

I think my alignment is showing...
https://dl.dropboxusercontent.com/u/6917736/AlignmentShowing.PNG
Where it says,"Currently selected response: Neutral 8.1", I think that may be my alignment. Is it supposed to do that? I don't remember that from encounters before. To be clear, the encounter has just started and I have selected no response yet.

I've noticed this for quite a long time, though it didn't really click what it meant until fairly recently after scouring the XML a bit to understand it better. Personally, I don't mind having some way, even if it's not a constant way, to know where my moral compass currently points. There is, to my knowledge, no benefit or penalty to going either way (and, in fact, you're probably "penalized" less for being neutral or selfish than going out of your way to being a good guy). I wouldn't be unhappy if that stayed visible, but I wouldn't be that upset if it went away either.

The meal given at the ATN enclave doesn't help with dehydration. I managed to arrive at the enclave after a trek that left me dying of thirst and hunger (high metabolism didn't help), but after the meal my thirst had barely been quenched and I couldn't go back for seconds; some guy even called me a freeloader, even though it was clear that I was suffering from severe dehydration. The doctor at the camp had my wounds dressed but that's all he must've been qualified for as I was kicked out the door as soon as that was done and barred from further help.

Hey Guys! I'm aiming to get a new build uploaded today with some fixes to the visibility system. I should be able to address several of these issues, as well.

This is doable, though it would take some time to setup. I'll add this to my list.

I've taken most of your suggestions here, thanks! The one notable exception is "glint," for which "of" is acceptable. E.g. "glint of steel," or "glint of greed in his eyes"

It turns out there were some bugs in this stage transition data. For one thing, #3 was re-adding #2 when removed (the reverse of removing #2 when #3 is added). Due to the wrong order of operations (immunity vs. chain effects), #2 was being added before immunization.

As for the 72 hours after 48 hours with #3, this turned out to be a major bug in the save game code. Conditions which stacked were having their start dates changed to the current date. Both of these issues should be solved in upcoming builds.

This was a missing encounter node for a certain combo of game flags, so I've added it.

I had to remove this option as a valid slot for blue sashes. Unfortunately, their slot depth (3 on torso) was incompatible when applied to the face. Fixing it would mean writing a new system for different slot depths on different slots, and then changing all data to match.

Still wondering what causes this. I've seen it rarely, but can never force it to happen. Let me know if you notice the cause!

As Kaaven mentions, this is likely due to missing Ranged skill.

I think Tactless may be right. The docs are not viewable via the Laptop encounter UI. One must sift through the docs like normal items in inventory. This is easiest if done while the laptop is in one's hands, switched on, and unlocked.

This is some old data that was exposed in a recent encounter system update. It's showing the game ID for the encounter, "Neutral 8.1". Some day, I need to go through those random encounters to clean this up.

The ATN meal (and Diner meal) both provide 17 hours of food and 7 hours of water. (The game measures hunger and thirst in hours.) Basically, they offer a full meal and bottle of water. If you were dangerously dehydrated, you'd be near 72 hours of thirst debt. So it may not impact your situation much. You'd need ~10 bottles of water to re-hydrate.

I'm comfortable bumping up the meal's hydration value to something more like 2 bottles, since 500mL is pretty meager. And the food can bolster a bit, too. However, for someone going on 3 days without water, they'll need to supplement somehow.

As always, thanks for the help finding bugs, everyone!