I have played a few quick rounds with this latest build. It seems a bit harder, although perhaps I have just had unlucky runs thus far. I did have one bad encounter with the effects of the new stealth system. I had made a kill and cured the meat near the ATN. I was hidden and had hidden my tracks and was bedded down for the night with 3 noise alarms set. I was awoken by someone entering the square. Then I spent about thirty rounds trying to spot them. I was never able and the encounter would not end. I didn't want to leave my camp, so finally I tried revealing myself. At first that seemed to do nothing, then after a few more rounds I died. Apparently a bad mutha snuck up and rifle butted me in the back of the head and knocked me unconscious. I know it was a bad idea to reveal myself, but I basically did it out of desperation. At some point shouldn't an encounter where apparently neither party can spot the other end? I basically got into a stealth gridlock. Next time I would just flee but that seems unrealistic to have to flee an area you prepped just because you get in an endless encounter.

Not sure what caused this, but my savegame that transitioned from 9934b to 9935b goes from 5 to "NaN" in moves remaining when one moves, effectively becoming able to move until stamina reaches 0 and the player collapses from exhaustion. Once the player awakens, moves are back to 5 and become "NaN" again when you take a step.

This also allows for unlimited crafting. I'm guessing a variable got bungled up between patch levels and it only applies to games that were saved in 9934 and were loaded in 9935.

I'd like to explore this a bit more before starting a fresh game, but could someone confirm whether this bug does NOT occur with a fresh 9935b savegame? If it does, then that's a pretty enormous exploit.

EDIT: Scavenge is disabled while Moves are set to NaN (which is probably normal).

I noticed the same, though it does not allow for any scavenging, until awoken. (though sleep could be triggered manually) I did however, start a new code,(though I didn't save) and found this to not be an issue.

I don't think it's a deal breaker, since if you have even 0.01 left it is technically possible to move to any adjacent, non barrier(wall, ocean/sea) hex, but I do feel it's a little more expensive than it should be. Perhaps just a +1 modifier to where it's 1->2 and 2->3? I don't know, maybe I should give it a chance to grow on me.

Yep, I got this exact same thing.

Seems like a misplaced variable somewhere, not a very large issue as it's /only/ present in games that were saved in .9934 and loaded in 9935.
Was still pretty funny when it happened to me, though.

Equip travois. Pick up "Hiya Poopy" children's backpack or Yukon backpack. Neither can be loaded onto travois?

At some point I got blue rot 2, and in the player conditions screen it showed "blue rot 2" over and over towards the bottom of the screen. I saved and quit, and when I continued the game, I no longer had blue rot, just the symptoms: headache and vomiting.

I had the same issue occur to me. However, the game lagged noticeably, and when I did a save and quit, I was unable to load the savegame. It would hang.

I encountered more than one Blue Frog, and due to the hiding mechanics, I was forced to engage them at melee range. I'm wondering if it stacked extra, over and above your issue, which caused my game hangup on reload.

The bug is a carry-over from the previous versions, but still quite severe one so to remind:

- I was sleeping near the Junk Market when someone approached me. It was a guard, but because I was asleep, he couldn't identify me, so he called a drone. And so I was banned from the DMC for no reason, other than that guard's incompetence.

- On a separate note, a weird behavior occurred during that encounter: as I finally woke up and reviled myself, the guard just had a chat with me, like nothing happened, while the drone was running away from me, like I was the devil.

I fear putting NPC awareness and player awareness both on the new advanced codes has caused some bugs in AI behavior and balance. not that progress is bad, mind you, but I think this will need some balancing reworks, let's hope it can be fixed easier than the blue rot problem.

And I do apologize, I fear one of my suggestions might have lead to some of this... :{

There really needs to be some kind of AI hook where a drone will not be called nor a ban initiated unless the player specifically engages in a hostile action.

A couple of reasons for this. One, neutral actions (approach, retreat, hiding) should not cause a ban. It makes no sense, and it punishes the player for using game mechanics that encourage careful survival tactics.

Two, let's say that a player gets lucky and kills a guard in a single hit. There's no opportunity for him to radio for help, no indication the crime had any witnesses, so I say the player gets away with it.

Of course, that's unlikely to occur given how heavily armed and armored they are, so, provided they aren't stunned, they would call for a drone assist on their next turn. If it's less a radio-in and more of an emergency call button to summon the drone, it could even be used while stunned (much like the Wait command can be).

well, that sounds decent enough, more careful AI building could definitely make for some improvements. But how much energy the guys at Blue Bottle Games can put to this in the immediate, I have no idea. As just another gamer, I don't know what their priorities are, save perhaps, the desire to apply their efforts in ways they believe to be efficient given their limited resources.

Both instances should be 'its'. Things like this ruin scenes. "The miracle never happen", anyone?

Typos from the Merga's Realm event, when Hacking the projection device:

Also, since I was approaching a DMC Guard while summoning the Wraith, he called his drone buddy to make quick work of it. I feel dirty. Should this be allowed?

I seem to have encountered this endless searching situation as well. I have the Myopia penalty, and I've just spent over 20 turns looking for the ambusher while behind cover.

[Carryover from 0.987] When there's a non-full stack of branches or twigs on the floor of a forest tile, using the forest item makes the image of a new stack with that previous amount blank. The stack still exists on the floor, but you have to switch to a different window for its image to load again.

I've also been able to reproduce it with water sources (marsh/river/lake).

Destroyed a cleaver directly from my duffel bag on a spot that would also be over the backpack icon, but the image persists, overlapping with said icon and even persisting into other windows.

Save and reload fixed this. 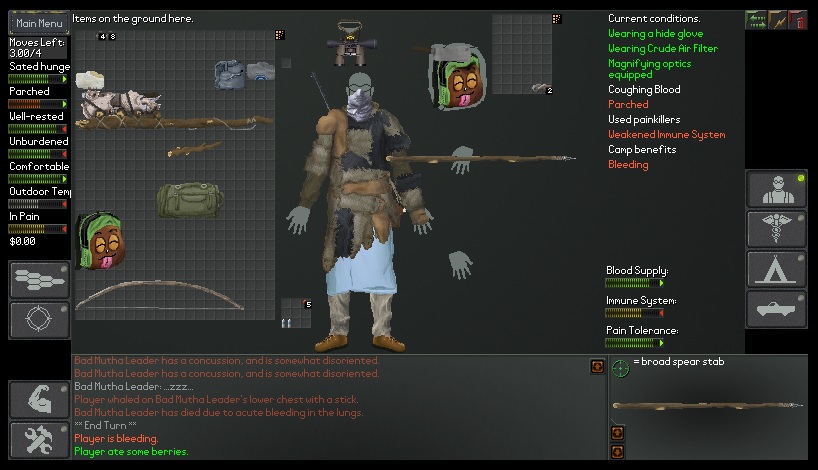 Hm, sounds like I still have some wrinkles to smooth out.

This seems to be a bug resulting from incompatible saves. v0.9934b and earlier are missing a variable which affects cost per move. Without it, the game cannot calculate move cost, and assigns NaN, breaking the game. Starting a new game in v0.9935b and later should work.

This is definitely a new issue caused by changes to the visibility system. I'll need to figure out a solution for it. Depending on whether I find one this afternoon or not, I may simply upload what fixes I have in the interest of addressing some other major issues that were easier to fix.

This was an oversight on my part, and I'll add those as compatible items.

This is a recursive condition bug I introduced in v0.9935b. I have a fix and will upload it today.

This is still an issue, and exacerbated by the new hiding changes. I'll have to find a way to fix this, too.

However, it should be noted that the DMC guards will not flag a retreating player. They will also remove their flagging if the player talks to them/ceases fire later in the encounter.

They will, however, flag players who approach without responding to hails two or more times in an encounter, as well as targets who remain hidden. Though, as Kaaven points out, this presents problems for sleeping, hidden targets.

Similarly, a DMC guard who is one-shotted will not flag the player. Flagging only happens if they execute that battle move.

I may have to make the searching move a cumulative stat bonus, so it gets stronger the more turns one spends searching. This reduces the benefits of hiding a bit, but with ambushing possible, maybe hiding will be useful long enough to sneak attack in non-plains/field cases.

I'm usually pretty strict about typos, but obviously these escaped me. You're right in all cases except one: "tact." This was meant to be "tack" not "tactic."

Looks like this was a bug in the code that handled stack remainders in auto-placement. Should be fixed next build.

How did you destroy the cleaver? I wasn't able to destroy an item and make it do that, but maybe there's a special trick to it?

In any case, lots of good bugs in here, and I should hopefully have most fixed today. Thanks!

I was running this character build, when my character became dehydrated forcing me to drop most of my items because I became overloaded, I then ran into a bad mutha which I was forced to surrender to because I was still overburdened. I only made it about two tiles away before I was overloaded again despite having nothing on my character at this point.

I don't know if it's intentional that your character can become overloaded without carrying anything or not, but my character is now stuck in place without being able to continue the game. The game says I'm unconscious, but I can't click anything to progress to the next turn.

http://puu.sh/bdez6/2e585ba4be.jpg - As you can see I would probably be dead regardless of weather or not I could move, but I wasn't able to progress the game by clicking anything because I was unconscious. Edit: I was able to work around this by saving the game and reloading it.

http://puu.sh/bdeFF/6ef80bacaa.jpg - (side bug) It looks like I have items in this picture, but I had already surrendered them away.