I honestly hate the whole idea of DMC snipers.

The game is hard as it is and doesn't need unrealistic overpowered "game mechanics" to be set against you to make it harder.

I understand that the gear that DMC guards have are considered "Endgame" but there really is no endgame to Neo Scavenger. You never live all that long and there is never any safe part of the game where you can rest knowing that you won't ever die.

DMC guards are hard enough considering that they are wearing the so called "end game gear" so why do they need help from snipers?

They carry rifles, shotguns, and pistols along with wearing bulletproof riot armor.

Forgive me but it seems like DMC guards are like babies and Dan(?) wants to keep the big bad wolf aka the Player away from them.

So he added in overly powered invisible ghost sniper support to already overly geared up guards.

The snipers are so unbelievably powerful and can hit you even behind cover.

What doesn't make sense to me is why a hardened guard in full riot gear and armed with a primary and secondary weapon would be scared and intimidated by some hobo with a meat cleaver that wandered out of the forest.

Surely they've seen all manner of humans and creatures far more intimidating than the Player.

The guard is armed to the teeth yet has to call in backup when he's in perfectly good health.

Realistically in an apocalypse situation where ammo is scarce, why would snipers be called in against such a small and weak threat?

The only way that I'd see snipers being balanced and realistic is if DMC guard could only call in support when they are within 3 hexes of DMC and are on half health or below.

I know your response is that "The player can farm DMC guards and sell off their gear."

Well, there are a few things wrong here.

1) This is a singleplayer game and that scenario would only happen by people doing it.

2) There is no guarantee that the player will live very long by doing this.

3) Making DMC guards stupidly impossible to kill is not the way to go.

Instead the AI should be adjusted so that the more guards the player kills the more aggressive the guards become.

If you've killed 3-5 guards then they clearly know that you are a threat. They've already banned you from DMC.

Guards should stop asking to ceasefire and start firing on sight. They should also start swarming towards the player whenever he is within sight.

It only makes sense that if they see you as a real threat that they would start trying to take you down. Roleplay-wise, possibly a large bounty on your head.

If there are multiple guards on screen then they should be drawn towards the player. All guards have smartphones and it would makes alot of sense that they would communicate and let each other know that this major threat is within distance of DMC. Thus all of them start swarming you.

That is how I see the DMC guard "end game" gear problem being solved.

Sure you might be able to kill a lone guard or two but after that it would get increasingly hard because you just put yourself on a wanted list.

tldr; The current guard and sniper situation is so ridiculous. The comic I made was actually meant to show how ridiculous it is.

This is pretty bull and makes no sense at all. 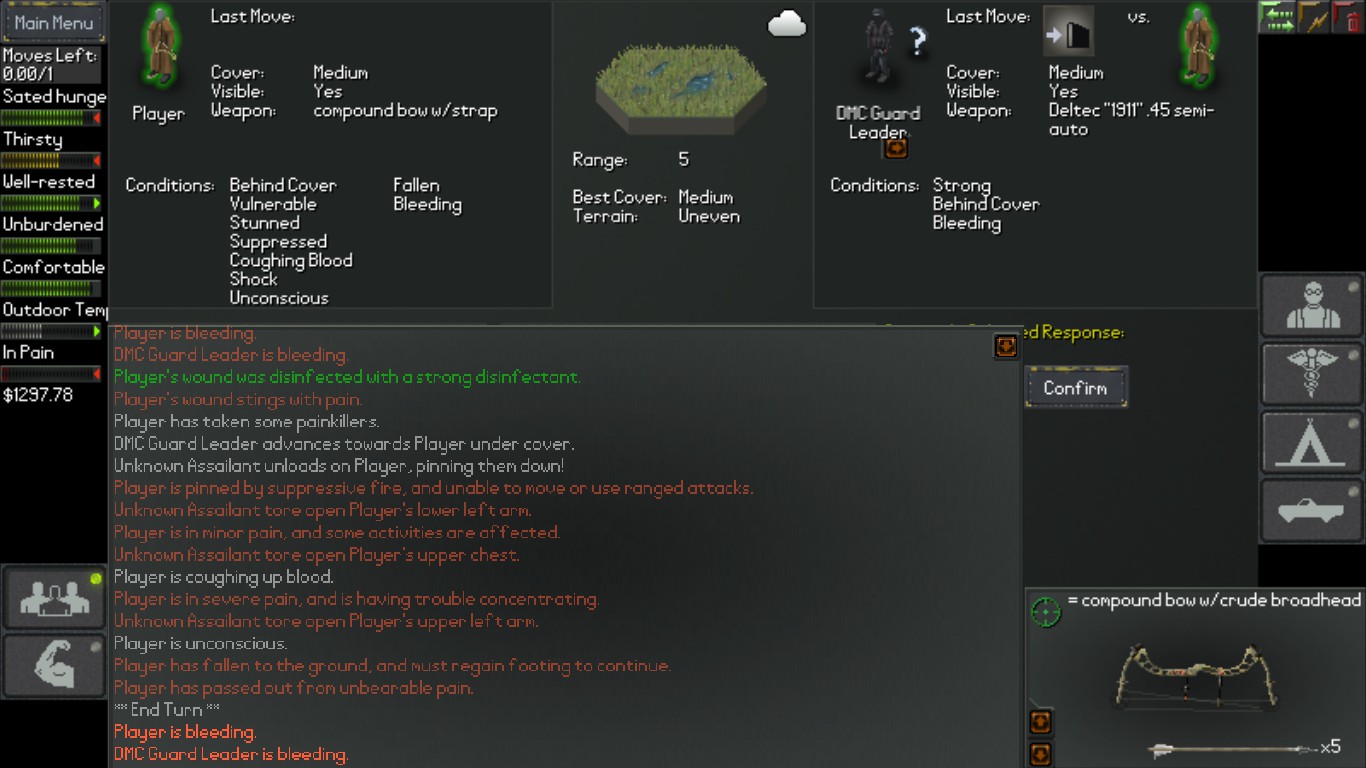 We're way out in the swamps where would the DMC sniper come from?

Is there a sniper following ever individual guard?

And what's up with the sniper's weapon? It's supposed to be a rifle yet fires like a shotgun at close range.

I really hate this and wish you guys would respond so that I could hear the reasons why we need this sniper crap in place.

Most of your concerns were mentioned by other people before, here and there. And you are right, the way that snipers work is somewhat... weird, to say politely. Dan already acknowledged that, and said previously that he will look into the whole issue, if schedule permits. When I talked with him about it, an idea of turning them into the aerial drones was mentioned, to give a little sense to the way they work. Plus some changes to the mechanics of course, but nothing is decided yet.

Basically, guards need some special support because, to be totally honest, NPCs in this game are as dumb as a rock. They might be equipped with absolutely best gear one could imagine and they still be very easy to slaughter, simply because the way that AI works - choosing moves from available pool at random is all they can do. Anyone who knows how to play can beat them. When originally introduced, they were alone and were mercilessly "farmed" by all but most inexperienced players. The only problem right now is that the sniper idea do not really fit and makes some people scratch their heads. So yeah, Dan has to work on that but, as I said, it is already on the list.

Couldn't the AI just be improved?

As far as I know - no, not really. Of course, it is technically possible - he could hire a few specialists, re-do the whole combat engine (or even better, port the whole game into a new, designer engine) and build a proper AI, but that is somewhat beyond the possibilities of a single guy, building a flash game while living off his savings :D

Seriously though, while Dan could (and most likely will) tweak the AI here and there, it seems that he squeezed all that was available from the Flash format (never did I encountered another Flash game nearly as complicated as NS) so I guess not many improvements are possible. Not to mention we are now around two months before the planned release date, so any big system changes are out of question.

Hopefully, NS 2 will be built on a platform which will allow for slightly more complicated AI (but I honestly would not bet my better hand on that - there is only so much that can be done in that matter, without cheating).

"SNIPERS OP!"
[Insert rant about op snipers that are now replaced with slightly more OP drones]
"OK SO LETS TAKE AWAY SNIPARS AND MAKE IT SO ALL THE DMC GARDS CHASE U OK THATS TOTALLY A GOOD WAY TO COUNTER OPNESS"

This idea is like putting kindling onto a fire and saying "There! That'll put the fire out!"

I only agree that insta deaths that are not obviously avoidable shouldnt exist or should be few and far between.
As in snipers, so i still think snipers should exist, just there should be a counter.
Oh wait theres dmc drones now?
ok this is fine, theres tonnes of counters to drones.

Please, do not necropost - the last response to this thread was one year ago, and the thread was started even further back, over two years back.