What's the highest amount of days you, yourself survived?

13 days, then ran into the infinite turn bug while sleeping, and died of organ failure due to heat stroke.

28, got swarmed by dogmen. took two of 'em with me though.

8 days and 6 hours, died from 3 melonheads plus a dogman.

14 days and 22 houers, I woke up to my hex being surrounded by dog men. Literally - every hex around me had a dogman

108 days 21.89 Hours (Died of Traumatic Brain Injury)
(or more than 3 months)
i killed myself at the end,because there was nothing much to do left...
(Took of the Necklace and had a Final Battle with the Wraith) 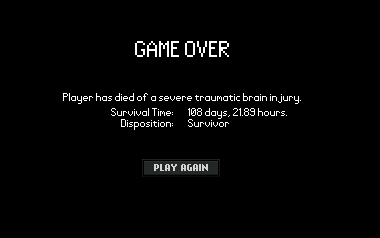 2 Hours
Something stupid. (AKA dogman bonerush)

My new high score is 18 and a half days.

I was well armed and supplied - I had like 12 bullets of the right caliber - but I got taken down by a barefooted Mutha with a sharpened stick. I demanded she surrender and she hurled a spear through my leg. As I tried to regain my footing she dislodged her spear from my leg and pierced my lungs. I never got a third move.

Yeah my new high score is 18 days and 8 hours. I died from 3 bandits, another trolling melonhead and two Dogmen.

3 months and some change. Ran out of stuff to do long before then, but I was enjoying just kicking around the woods and eating squirrels.

Two and a half weeks but lately only about 7-10 days because I keep accidentally crafting my bronze talisman into an arrow or medium thread and then ending my turn....you can guess the rest.

I am really getting tired of Merga Wraith killing me.

56 days 21 hours, Got bored and Went one on one with the Wraith. Somehow I managed to kill him with major injuries, Then a Dogman came and finished me off. Never did get into the portal. I wonder.... 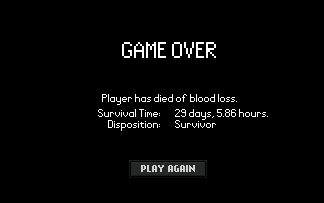 55 days 17.16 hours with a unique character (athletics,strong,tough,botany,hacking,eagle eye with metabolism and insomniac).