Anyone ever kill one of these guys?
They're all armed to the teeth with Military Rifles and firearms. Any ramifications from killing one of these guards?

I've killed a number of solitary guards and still have normal access to DMC and other guards still don't shoot at me on site. I don't just disable and loot the guards, I always kill them in the hopes that keeps other guards from knowing what I've done. If that doesn't keep the other guards from knowing then either I just haven't pissed them off enough to try taking me on yet (I'm fully geared and combat specialized) or currently faction standings just aren't in the game yet.

You get any good stuff from em'? They tough to kill?

I've killed one, which was extremely hard, even with guns.

But more importantly:
Either the DMC guards die somehow, or they leave their stuff on the ground. At one point I was sporting ~4-5 sets of complete guard stuff including rifles and pistols.

However one of the big questions I have is: How can you "negotiate" with the guards when there are ~6-7 in your hex, and no-one is the "leader"... The guards make it basically suicidal to go to the junk-market, since they will all gang up, and even when I try to negotiate with one, others already start shooting.

So it's unbalanced in 2 ways:
-get stuff to easy from them (just lying on the ground)
-get killed by them (ganging up)

anyone can shed some light?
br,
Steel

There are two separate bugs at work here, both known to Dan and already fixed, so the next version should cut them short.

First - the guards dying of starvation/thirst and leaving their gear lying around. Not only does it allow player to collect it (being somewhat of a joy kill) but also allows looters to pick it up as well. They can then be possibly mistaken for guards while being able to attack player not restricted by guards faction standing. In the upcoming version, guards will be out only for 8 hours at a time, making it impossible for them to starve or walk around wounded and slowly bleeding to death.

Second - there was a bug that made guards unable to find a correct peaceful moves when they encountered player that was unconscious or sleeping and causing them to attack instead. Again, Dan located the problem and next build should have it fixed.

The problem of how should peaceful negotiations work exactly is still open, and can be discussed in this topic.

What reasons are there for guards to attack you?

I had a fresh char, just reached DMC, was sleeping outside in Sprawl and this happened: 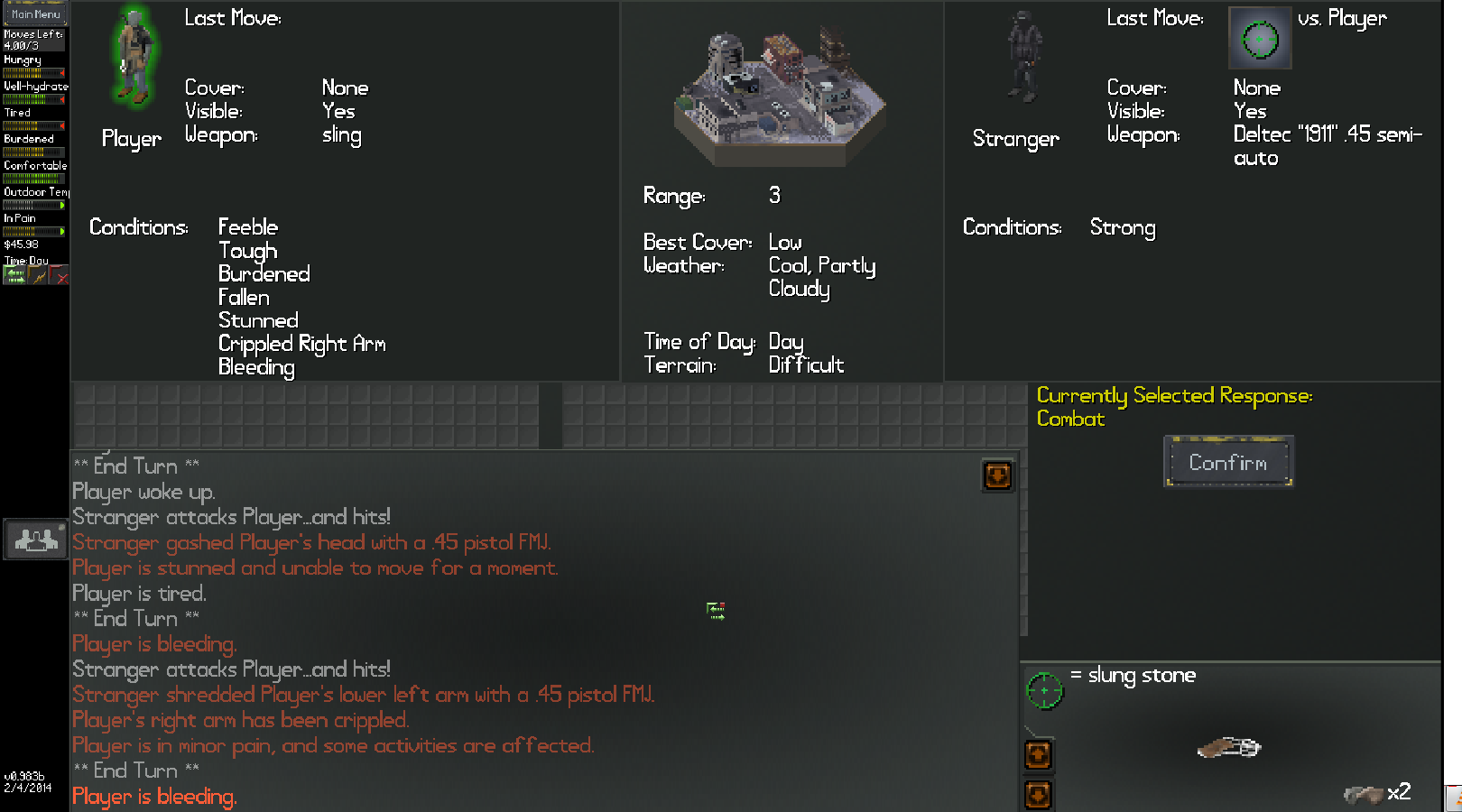 a bug that made guards unable to find a correct peaceful moves when they encountered player that was unconscious or sleeping and causing them to attack instead. Again, Dan located the problem and next build should have it fixed

It does not seem to occur every time but sometimes :)

I got killed exiting the city - went directly to combat with a stranger dressed like a guard. The stranger immediately started attacking.

Tried talking etc but no response - just straight up hostile. Then fought but eventually died - my broad spear didn't seem to do so well against the armor.

This happened to me after being exiled but not before :S

I wasn't exiled, pretty fresh character - second visit to the city. First visit I only visited the fancy restaurant, second visit I was at the restaurant, convenience store, fast food place and outdoor music jam.

I've been playing for a while now, and I'm able to basically live off these guys as a whole! Don't have to venture out of the DMC ever. xD
Who needs to scavenge, when you can simply murder guards, and sell their shit for about $1500 profit each time! Food isn't a problem, armor isn't a problem, guns and ammo- DEFINITELY not a problem. These guards basically paid for my eye augmentations. Got more than 75 shotgun shells, and 60 45. ACP rounds.

But why even attack them, when you can just cruise through the area picking stuff off the ground...

Even if you dont kill them, they still die from hunger and such, causing them to drop all their gear. This is how i made alotta money, almost 10k in 2 days. They will kill you no matter what, but will avoid you if you have a ranged weapon vs 1 guard. If there are multiple, most likely they will try to kill you. I've tried to be peaceful but it doesn't always work, died a few times trying to enact peace. The armor is pretty hard to penetrate, but i've had best chances with the rifle using sp rounds. Besides that, they dont seem much friendly unless you have some moral shaking traits, and they all appear as strangers. I just had a similar experience. Seemed to be related to hiding. I don't usually hide at my normal camp near DMC, but I clicked it this time. Was woken up and attacked before I could reveal myself. On the turn that I revealed myself he called in a drone.

I killed the game and restarted, hid again before sleeping and was attacked again. Killed it and restarted again, did not hide and was not attacked. Was woken up, and I was able to call a ceasefire on the first turn.

Lesson, don't hide before sleeping near DMC. The guards assume they're being attacked.