Is this possible in real life?

Well take a look at a picture, how likely is this to happen? 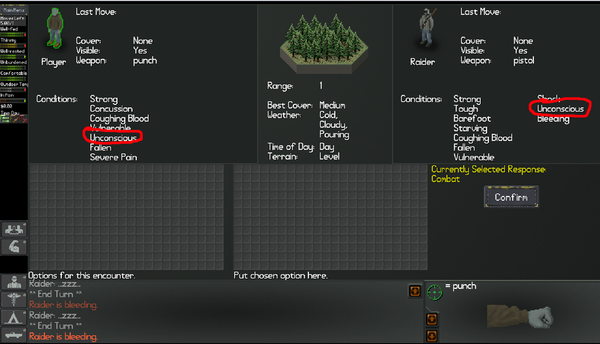 Looks like 相撃ち -- You struck each other down at the same time, perhaps.
There have indeed been recorded instances in real life, although it isn't common. In the game perhaps one or both of you collapsed of blood-loss or exhaustion on the same turn? Then it becomes a question of who wakes first (or if a third party intervenes).

Well, at least you died knowing you potentially took out you enemy.

Yeah, okay. So you don't really know anything. You know you're dead.

I just wouldn't worry about it.

These things happen sometimes, and it's usually just best to chalk it up to a fluke. There are plenty of recorded instances of fighting men knocking each other out/killing each other throughout history. You don't really need to look that hard.

"Who the hell is Philip Kindred?"
The Wastelander: A Tale from the Apocalypse

However, if you suffer a head injury or concussion that knocks you out... the potential for entering a coma and dying are actually high... the only thing is that usually other people around help wake you up or get you medical attention.

Although I find the amount of damage in this game a person can do with his fists each round is fairly high.

There is difference between getting hit by a bare fist or a by boxing glove. However, not using bandages should result in an injury risk for the attacker.