Today was a mix of narrative work, art direction, and item creation.

I was thinking about the Merga Wraith the other day, and how some players have reported their ability to defeat it in combat. Originally, this was going to be made impossible, so the wraith must always be avoided. (There's a certain mythology behind it preventing a mundane defeat.)

However, I realized that this might be an opportunity in disguise, and that perhaps I could open a door for further exploration if a player defeats the wraith. There are some clues to Philip's (and the setting's) background that could be uncovered if the player learned a bit about the wraith. Not too much, mind you, but a glimpse into the wraith's origin or abilities could be revealing. (And if done right, maybe foreboding!)

So I spent some time today exploring ways to make that possible. It's a branch I wasn't originally considering, but it's a useful one in the collection of branches players can explore to reveal their and the world's past.

I also received another concept art draft today, and man, I'm pretty excited for you guys to see. I think that if I were rich, I'd just commission concept artists to make all my ideas into paintings all day long. It's addictive!

Finally, I spent a few minutes tweaking the item discharge code to work in reverse. Now, I can specify rates of item creation for containers, so things like Bob's "Hot Brick" can generate charges over time. Which, of course, I did!

This might also open up the possibility of making item harvesting more intuitive. E.g. instead of "crafting" water from rivers and lakes, maybe they're just big containers full of water that replenishes each turn? Seeing some new players struggle with the UI we have now makes me think there's still usability work to be done there.

Normally, discovering a UI failure would be discouraging. But it's very useful to see specific examples, as I can focus on tangible cases.

That's all for today. Hope everyone has a good night!

I am pretty sure there is not

I am pretty sure there is not a single person here, who is not interested in what Merga Wraith is. So a great "+" for the idea of some way to get at least partial info on his biography.

On the subject of UI understanding issues some new player have - I do get that it is complicated and hard to swallow at first, but at the same time I think it fits nicely for all the multi-layered functionality it serves. One change that I think iI really would welcome would be a couple of tabs at the crafting screen, allowing better segregation of items at hand - "tools", "parts", "natural resources", "clothing" and "miscellaneous" would be enough for me.

Now if I was to pin-point a culprit, causing all this "UI confusion" thing, I would had to point out to the little "Help" button hiding somewhere at the main menu. It is there, and it seems no one uses it - not really surprising, considering big, juicy, red New Game button drawing all the attention :D No one really clicks buttons called Help anyway...

However, re-branding small "Help" into clearly visible "Game Controls" and placing all the game's controls, key shortcuts as well as few screenshots explaining the game UI in a simple matter there (something that this bloke did in this post here http://www.neogaf.com/forum/showpost.php?p=86751160&postcount=43), would in my honest opinion eliminate good 70% of new player's problems with the game's GUI.

For the curious sort of people, Jordan Grimmer have already shared a preview of NEO Scavenger on his blog.
http://jordangrimmerblog.blogspot.ca/2013/10/neo-scavenger-enviros.html :)
It is magnificent by the way, I can completely understand your upcoming addiction for concept artists Dan. :)

My biggest problem in the

My biggest problem in the beginning was to find out how to get water and wood. I think the best solution is to show an explanation as soon as a player enters a hex with a water or forest resource for the first time. The idea with replenishing containers can't hurt, though.

@Kaaven, yeah, I've definitely heard quite a bit of speculation and curiosity about the wraith!

Also, your comfort level with the UI after some practice echoes something a former colleague told me about NEO Scavenger a while back. He's a professor in a game design course, and both he and his players said that NEO Scavenger was sort of like a Google product: unintuitive at first, but once you get the hang of it, the controls work well.

The crafting screen is definitely a bigger part of the frustration, though. I've heard some recommend what you're saying, so items are grouped by type in tabs. Another suggestion is to group it by source location (e.g. backpack, ground, camp, vehicle, etc.). Both of those make sense, and have advantages. The only disadvantage to either would be extra clicking, but it might even out when we consider how much item-hunting goes on with the current, consolidated view.

The "help" button is definitely due for an overhaul at some point. In a magical alternate reality where I have abundant time, I've wanted to do a really stylized set of help screens which look like a cracked, flickering iSlab app. Complete with screenshots, survival tips, hotkey lists, etc. Cameron even wrote a survival guide in the style of a journal, which would be cool to include. I may still do it, but it'll probably come last.

As for "help" vs. "game controls," I'm not sure if you remember the old title screen: 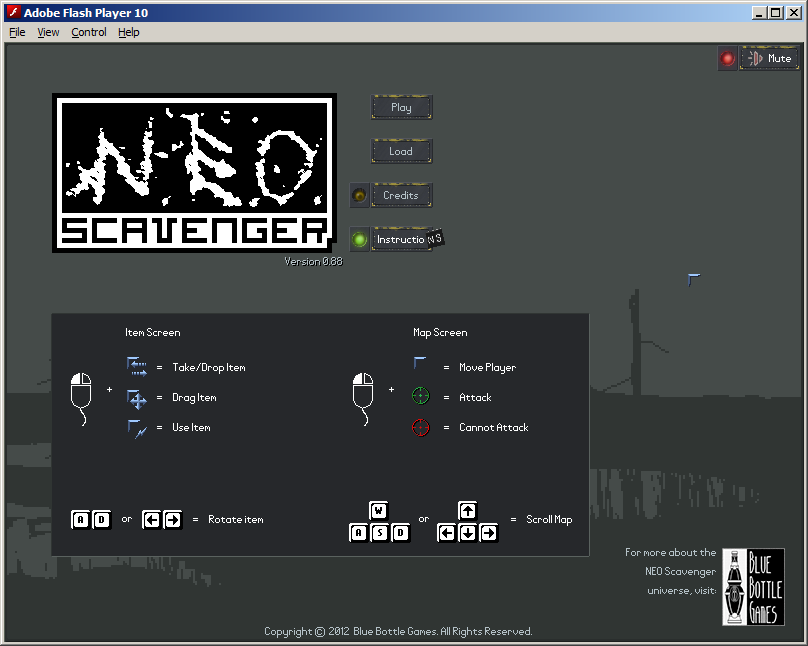 Back then, the "help" button was equally prominent to "play," and I still think it got ignored. I think people just ignore "help" systems (probably due to the infuriatingly unhelpful Windows "help" experience) :)

But yes, you're right that the "help" page will need some more work soon.