- After the save-game is loaded, all "computerized" devices have their contents (files and apps) accessible. Clicking their "on/off" option, regardless if they have charges or not, resets them into correct working state (accessible for unlocked, blacked out for locked/turned off);

- Hacking devices only see hacking apps that are stored on memory sticks but not when app is directly inside the device;

- I tried to unlock iSlab using iSL-AK tablet hacking app via unlocked laptop, with both devices having at least one charge in them, but the hacking encounter showed no viable targets (iSlab was locked and on). Is this wrong or am I not getting something?

Kaaven - I tried to unlock iSlab using iSL-AK tablet hacking app via unlocked laptop, with both devices having at least one charge in them, but the hacking encounter showed no viable targets (iSlab was locked and on). Is this wrong or am I not getting something?

It is a bug. I tried hacking and sometimes computer sees other phones, tablets and notebooks, but sometimes not (game without saves and loads). So until it will be fixed this trait is useless (underpowered - no real help and too hard to start (find unlocked notebook and charge it)). And GPS software isnt working (flashlight software is working correct).

Kaaven - Hacking devices only see hacking apps that are stored on memory sticks but not when app is directly inside the device.

I loaded software in notebook an all worked fine until my notebook cracking software disapeared from hacking menu (after many uses), but it didnt disapear from my notebook.

P.S. Developer should make hexes with specific buildings where player can hack through doors to acheave more charges and electronics. Ah and make rare info in computers about old military or hospital outpost hexes far north. Last but not least make player able to hack notbooks without any cracking software only by using hacking skill in crafting menu (powered working notebook + hacking = unlocked notebook). He is hacker or not?! =)

I noticed that after a while the data inside a locked device becomes visible by itself. Powering the locked device again re-obscures the data.

EDIT: I don't know if this was already been fixed or not, but i still see camp benefits stacking on game load.
Sometimes I'm able to scavenge an open field in a city hex.

First, Bober077: you need enough charges for an hour in a device in order to hack it. 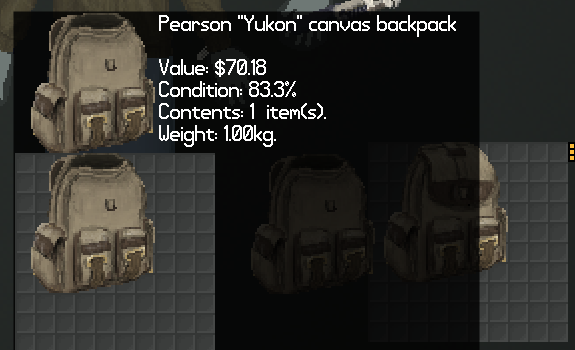 Prepare for the infinite backpacks!

I think only the AI is able to do that.

Nope, I did that (Though several looters graciously provided the bags (After I beat them to death)).

Say, can I use this picture on the wiki?

Sorry about these glitches, guys. I might've have fixed some issues only to introduce new ones in my rush to get a patch out yesterday. I'm going to be out of town this afternoon and tomorrow, so I'll have to dig into these a bit more when I'm back (either Sunday or Monday).

Re: hacking apps only seen inside memory sticks, do you mean that items like iSL-AK won't appear in the hacking encounter unless they're inside a memory stick? I.e. they don't appear when inside the laptop?

Hacking apps were originally $0, but they should probably have a value. Originally, they were found in the wild, and it didn't make sense to keep selling copies of the same software to the junk market. However, now that they're only found in the junk market, it makes more sense to give them a value.

Re: hacking not seeing devices, it sounds like you guys are doing it right, so there must be a bug. You can try adding more charges to the devices, as they could be failing because of insufficient charge (i.e. enough charge to turn on, but not enough to last a full hacking session). For example, the laptop takes about 60 charges/hour, and other devices are on the order of 1-10 per hour. Edit: I see Nim Spork beat me to it!

Re: GPS not working, what happens when you try it? Is it not revealing hexes or new scavenge locales? I thought I set it up as an encounter option, so one would need to use the device to get to the main screen, and then select GPS to activate.

Re: more uses for hacking, I plan to add some more encounters where hacking can do useful things. And there will likely be places to recharge devices, too.

Re: camp benefits stacking, noooooo! I'll look into that, too.

Thanks again, guys, for reporting these issues, and for your patience!

Some possible bugs I encountered while playing 0.978b. Some of these I have noticed in the prior version, so not necessarily new bugs. Some of these are pretty minor too, but I figured I'd throw them out there.

1. Laptop placed at bottom of bag can be opened, leaving half of it hanging out of the bag. It will stay like that until moved or closed.

2. Able to see laptops, etc. are empty even though they have no charge to turn them on. Is that intended? Non-empty items are "blacked-out" to start but the items are suddenly visible if the game is re-loaded. Then they are blacked out again if the device is used.

3. My player was unburdened with an empty vehicle attached, but burdened without the vehicle. I didn't understand that mechanic at all because the same amount of items were being carried by the player.

4. While at Junk Market receive message "Player is in a campsite with an average sleeping bag" when the market is selling a sleeping bag. Seemed strange given that the market probably doesn't want the player using the wares without paying :-) Pretty minor in any event.

6. Double clicking water will sometimes not transfer water into an empty bottle that is inside a vehicle (or backpack that is inside vehicle). I was pulling a sled at the time.

7. When emptying out pill bottles on the ground, sometimes the pills will be moved to another bottle instead of falling on the ground. At first I thought the pills had disappeared.

9. Containers (boxes, first aid kits, and backpacks) can be stored inside of other containers of same type, which I don't think is intentional. I even found loot from bandits nested like this.

10. I killed a dogman and his corpse was lost, presumably due to there already being too many items on the ground at that location. I feel like there should be some safeguard against this.

As a side note, I was unable to really test any of the new hacking features because it was several hours of playtime before I found any charges to even turn a device on (by this point had already bought the eye upgrades). A couple more hours in, and I still haven't found any unlocked devices. I really hope you change this. I'd suggest making unlocked devices and charges a little more common. Or at least have hacking skill able to unlock the laptop without having another unlocked device.

Got into a fight with five looters. After beating three of them unconscious with a crowbar :) all the action options disappeared. I could click the 'continue' button, but the usual option selections were all gone. Clicked the 'continue' button 10-20 times, but the looters just sat there and bled. After a few turns the looters started steeling my weapons out of my hands as if I was unconscious, except I was not tired, only in moderate pain, and had no conditions like 'stunned' or anything. Opened my backpack and got some new weapons, but I couldn't use them, even though it showed me holding them. Finally quit out, but reloading gave me a darkened play screen that I could not interact with. I have a save file if that helps, but I can't seem to find on the site how to send it to you.

The easiest way to supply Dan with your save file file is by using a hosting services/virtual drives such as Game Front, OpenDrive or Dropbox that let you upload/share files (best if packed with zip/rar). All you need to do is to upload your save on such site and provide a download link here.

@sugarskull, thanks for the detailed list! I was able to fix several of these yesterday, and a few of the more involved ones are earmarked for later (e.g. vehicle burden intuitiveness).

@Spike, the easiest way to share a save is as Kaaven says: uploading to a filesharing site (I usually use DropBox or Google Drive), and include a link here.

I downloaded the file, but it's definitely broken - after hitting Continue button game loads up GUI and rain sound but stays stuck there - no map, no current stats (all bars are full just like before starting new game). Upon returning to menu Continue button refuses to work again, getting game unresponsive for good.

Looks like the game was trying to load a creature that doesn't exist in the save file. (Probably one in the process of expiring when the game was saved.) I was able to add some error-checking to the load-game code, so this error should be avoided in future builds.

As for the save file itself, it loads into combat with two looters, and the player is in shock from pain. Most of the stat bars are green, except for pain, and the character appears to be battered to within an inch of his life. (e.g. bruising everywhere, concussion, fractured rib)

So as far as I can tell, the game is actually behaving normally at this point (apart from the above error on load). The player is unconscious, and there are no moves to choose from each turn. And it appears the looters are taking their sweet time with lingering about, instead of leaving the battle and allowing the player to sleep.

In the past, the game would've gone into "auto-end-turn" at this point, to save the player the trouble of clicking "confirm" a few dozen times while combat plays out with them unconscious. However, now that I've taken that out, it requires manual clicking.

I may have to change something here, but I'm not sure what yet. I could do something to better tell the player what's going on, I could re-add the auto-end-turn in combat, or maybe there's something else.

In any case, we've fixed a game-loading bug! And if nothing else, we've found a case where combat can get tedious and confusing. Thanks for taking the time to upload the save!