ZOM ZOM'S YUMMY BARBEQUE, what do these tracking items do? (may contain spoliers)

Today, after spending several hours just walking around the map, fully equipped with my pimped out gear(robot eyes,crow bar and 10,000 antibiotic pills) and I walk into this event I HAVE NEVER SEEN BEFORE!!!!!! 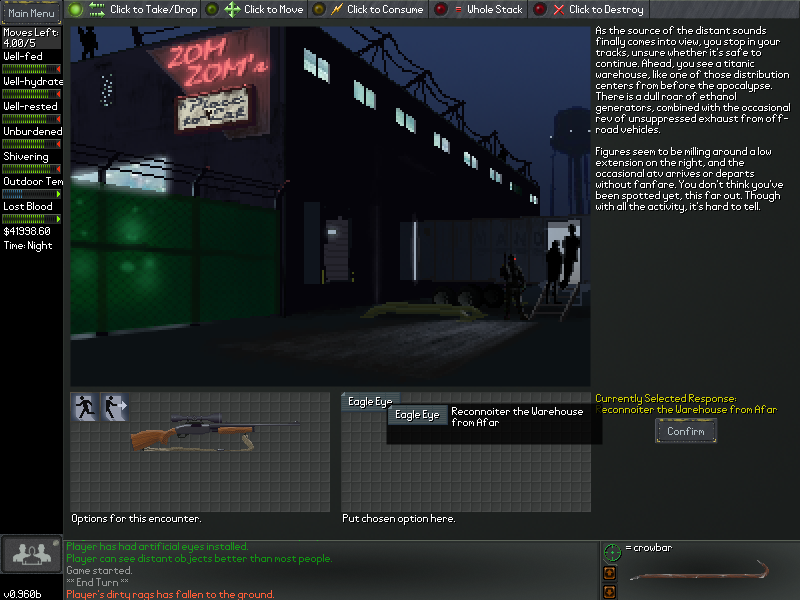 Now in this event, if you become "stock" and you go through all the right dialogs you meet this person who is willing to exchange your medical bracelet for an item!

If you dont give him the medical bracelet you get this 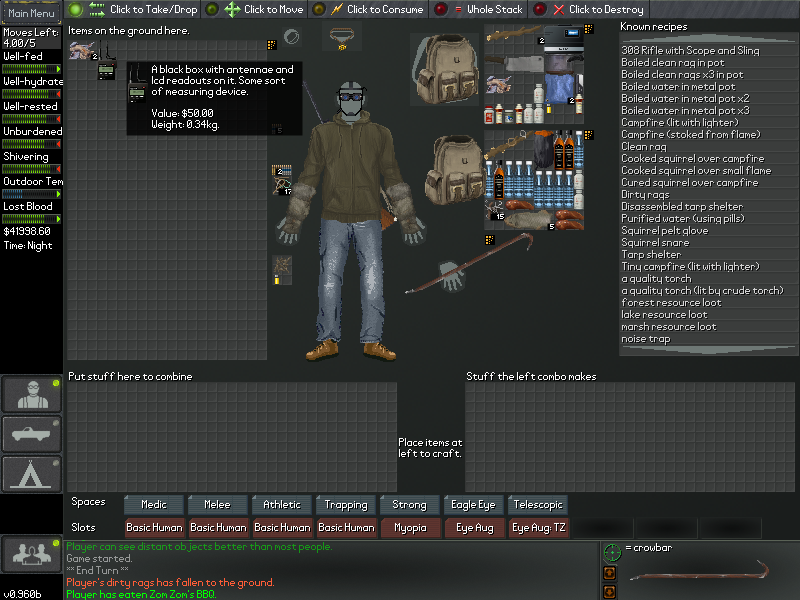 If you do give him your medical bracelet you get this! 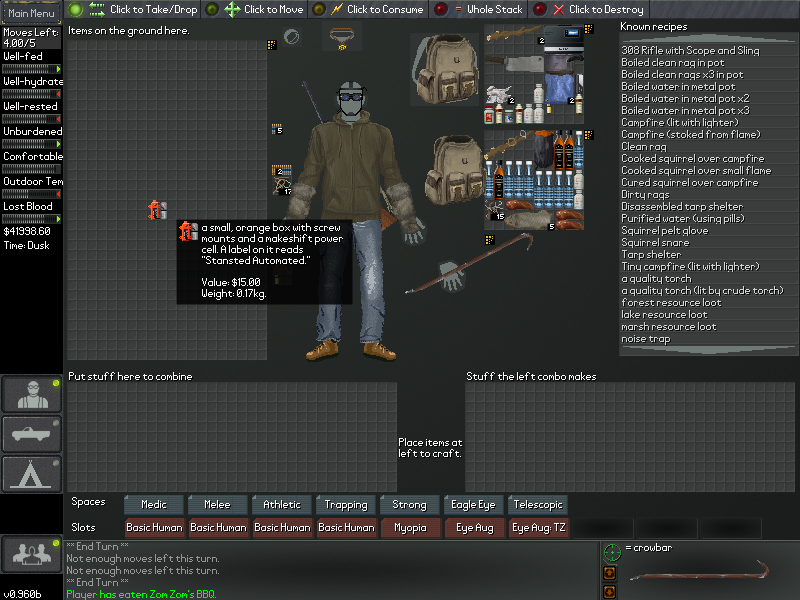 Any idea what these items do?

Hey dice4321! Those are actually plot-related items mean for later in the game. I haven't yet written the encounters that use them, though. So I guess that makes them teasers for now :)

Just tried this place out for the first time and had a few of questions:

1) Do you not get these items (or rather, chance for these items) if you enter as "Spectator" or "?"? If not, why (story-wise)?
2) Is the Asian guy's help triggered by your medical bracelet being worn? I haven't tried entering as "Stock" without it yet and am curious!
3) Plot-wise... why the offloading slaves/prisoners? Are these the BBQ?! I assumed the meat was from the pit fight losers who came voluntarily! :)
4) WHY do people risk coming in as "Stock" when there's zero reward for surviving/winning a pit fight? A few rushed mouthfuls of BBQ before their number comes up hardly seems worth it, but getting to take a few big hunks home afterwards (or similar reward) might be?
5) Not a question, just a request: please add a few more spectator fight descriptions! I'm getting to like hanging out in this place! :) Say, why not let forum members "compete" to design a robot or two? :)

Incidentally, just wanted to say that I really enjoyed the dialog/scenes that went with avoiding the fight ("Stoat"); made me like Zom-Zom's a lot more! Usually I'm not fussed about NeoScavenger's "plot" as I am about playing it as a sandbox survival sim, but this one made me rather eager to find out what's next! :)

Though personally, I think the player should be given the choice to just ignore the Asian guy's warning and stick around to enter the pit fight anyway, and/or be pulled aside by the same guy if they fight and defeat the robot.

4) Stock are people who either don't have anything to pay with and need the food to survive, in short they have nothing to lose, or people who don't know ZomZom's and chose the "?" option, like I did the first time.

It's possible some of these questions have since been answered, either by your subsequent playthroughs or in this thread. However, I think some of these are still open.

1) This is actually a bit of a story experiment Cameron and I were trying out. The Stoat will only appear in some games, and even then, I believe it's only when choosing "Stock." That said, he still leaves something at the coat check for the player to ponder if "Spectator" is chosen.

In story terms, there are a few agents in the world which are acting to make the player's life either easier or harder. The Stoat's motivation isn't well-reasoned, though. I have to work on that a bit.

2) It has more to do with a random variable, and your choice of stock vs. spectator.

3) In a word, yes. The "stock" is more entertainment than food, despite the misnomer. It wouldn't do to have the food spilled on dirty arena floor before cooking it. That'd be unsanitary! Not to mention, more than a few customers are likely to be put off knowing the source of the food. Instead, many are suspicious of the source, but hungry enough to blissfully ignore it.

4) You're right about this. The reward is just free food and entertainment. Initially, I figured it was more a case of stock being primarily composed of the oblivious. As in, "ha ha, let's go watch the newbies die." (Like Malacodor says.) However, word would probably get around fast. So maybe I need to rethink this.

5) I'm glad to hear that you found the spectator portion entertaining! If folks are exhausting the short list of example fights there, maybe I should add more. And the contest is an interesting idea!

Thanks for the feedback, and for the compliment! I enjoyed writing The Stoat, and it's good to hear that others enjoyed reading him!