- Installing a fridge appears to generate new contents for it as though it were a randomly generated fridge, so it seems you can just uninstall and reinstall your fridge repeatedly for infinite food/drink.

- Two of the sternward RCS clusters on the Edelweiss seem to be facing the wrong direction, with the thruster jets on the inside of the ship.

- This might have been fixed, need to test it more.

- This isn't exactly a bug so much as a limitation of the current AI, but characters have absolutely no compunctions about wandering into hard vacuum without protection while they're idle, or if they want to use a bed on a docked derelict, etc.

- When you leave OKLG and go to a derelict, any character interaction icons which were visible when you undocked from OKLG transfer over to the new map: 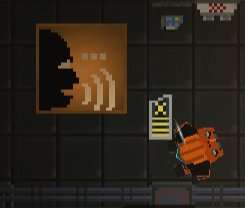 Quitting and reloading the game appears to fix this.

- My captain for some reason keeps trying to sleep on various pieces of clothing in his inventory (including his EVA suit) rather than using the bed which is a few meters away.

- I just started a new game, found a derelict I decided I'd like to restore, stashed some materials on it and went to another derelict to harvest floors/walls/conduits. Got what I needed, went back to the nav screen, and found that the first derelict had left its orbit and was now drifting towards Ganymed for some reason. I chased it down and docked with it, and discovered that a. the power in the ship had somehow come on, causing all of the stored gas on the ship to be vented into empty vacuum, and b. all of the stuff I'd stowed there was now gone.

Thanks for the heads-up on these! I'll start adding them to my list.

- Whilst replacing N2 canisters in a pressurised ship, my character frequently experiences momentary hypoxia, which also seems to cause the game to do some sort of recalculation on his traits and social levels, often giving him Weak Stomach and also Hunger Overfed. Don't know what causes the hypoxia, but there might be something to the theory you had about the intake sucking nitrogen out of the square that the canister gets installed on for a second. I'm not sure why hypoxia seems to provoke a cascade of social/trait changes. 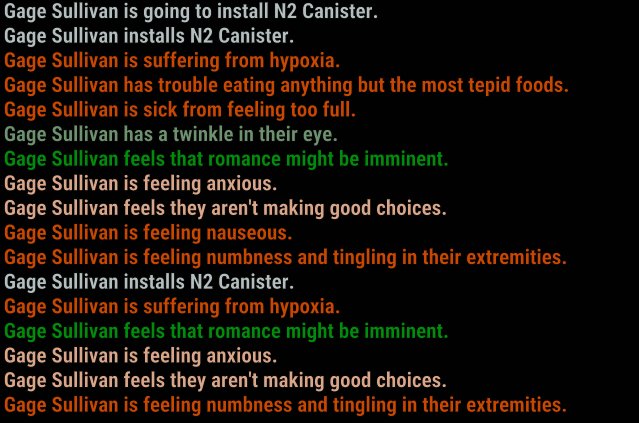 - Potentially significant bug: When docking at K-Leg for the second time in a single game, I noticed the atmo of the station seemed to have dropped to nothing, and that the air pumps were struggling to reestablish it against what seemed to be some kind of leak (I was careful whilst leaving after my first visit to seal the airlocks to avoid all of the inhabitants dying). More puzzlingly, when I left my ship and entered the station, the leak appeared to vanish and the atmo stabilised. I had to rip the locked doors out to save a couple of NPCs, as the atmo in the rooms behind those doors was also nonexistant. This bug has also recurred on subsequent visits. Some of the reports on the Steam forum seem to indicate that it may be responsible for causing instant death of characters under specific circumstances.

Edit: Started a fresh game in 0.6.2.3, immediately docked at K-Leg, everything seemed okay. Undocked, waited around in space for about an hour, docked again, and the atmo values were completely rooked - 9000K temperatures, 3000kPa of atmospheric pressure, 2000kPa nitrogen, 600kPa oxygen... my character should've been obliterated as soon as she left her pod, though her only status effect from all of this was "Air - Hot".

- EVA batteries can't be picked up using the right click menu, only by moving them around in the inventory screen. (Sneaky request: Can EVA batteries be made rechargeable?)

- I don't know if this is a bug so much as a balance issue with the social interaction system, but in my current game, my captain and all of the NPCs at K-Leg have gone into a neverending downward spiral in their Altruism, Esteem and Intimacy social stats. No one appears to be capable of any social interaction at this point that would improve these three stats and they seem to be permanently tanked for all characters in the game. According to the save data, my captain has the following conditions:

Which I assume is very bad. The only interaction available to him is generally Intimidate.

Edit: Also everyone has Weak Stomach/Nausea, probably triggered by repeated vacuum exposure due to the above bug in which K-Leg's atmo vanishes every time I dock there. But I don't know whether this affects social interactions. It does make them look horrified.

Additional edit: The way the available solo interactions are set up, it looks like most characters are doomed to end up in a state in which they're trapped in an infinite regression of the above three social stats. I modded the game to fix my captain's social stats, then spent a while watching him idle in his downtime, and he very quickly ended up with Altruism, Esteem and Intimacy all in the red again.

Thanks for the updated info!

There is definitely an atmo gremlin at work, as strange numbers and NaN seem to creep in almost every game. That's on our list.

And the social stat regression is more of a game balancing issue, but still an issue! It's useful to know which areas see the most deficiency, as we can bolster the moves available to address those.

- Again, this is just a minor balance issue rather than a bug, but it seems like mechanical parts are either underrepresented in the breakdown of how hull parts are scrapped or overrepresented in how much of them are required to repair damaged hull parts, as I've noticed a strong tendency to end up with tonnes of aluminium and carbon fiber and no mechanical parts after repairing a derelict with the components available - however I realise this might be deliberate. (For me, it has resulted in repairing being an afterthought, and my primary method for restoring derelicts being to scrap damaged parts on the ship I'm trying to restore and replace them wholly with parts uninstalled from other derelicts.)

This will definitely require a tuning pass, as many of these are best estimates right now.

My thinking so far was that chunks of broad material would be easy to gain from scrapping a wall or floor, but usable mechanical parts (screws, clamps, gaskets, etc.) would be harder to recover without damaging them.

But we'll have to see!