AAARGHH!!! Its a BIG UGLY BUG!! Quick squash it!

I thought it good to just do the same thing as our Chinese friend Brother Tony and list all the bugs I find in this post instead of littering your forums with a bunch of them.

So to start this list off is a pretty bad one that completely broke my game. Luckely I made backup saves. "phew"

Let's call it the UNTIME bug.
This bug is basically a punishment for sleeping before UNTIME.

As you probably already gathered I was sleeping after some laborious shipbreaking to expand on my very nice ship I found called spiritual bastard.

I slept for some time as I was already in a drowsy state from all the work after about 10 - 15 min of sleep my state went to tired and all of a sudden
I saw the UNTIME art popup this was very entertaining thank you.
BUT to my dismay when I got back to the gameplay I was lying on the floor instead of on the bed... P.S. Don't judge my Pajamas there comfortably.

I realized something was wrong here so I took this screenshot and crossed my fingers that everything was still working. 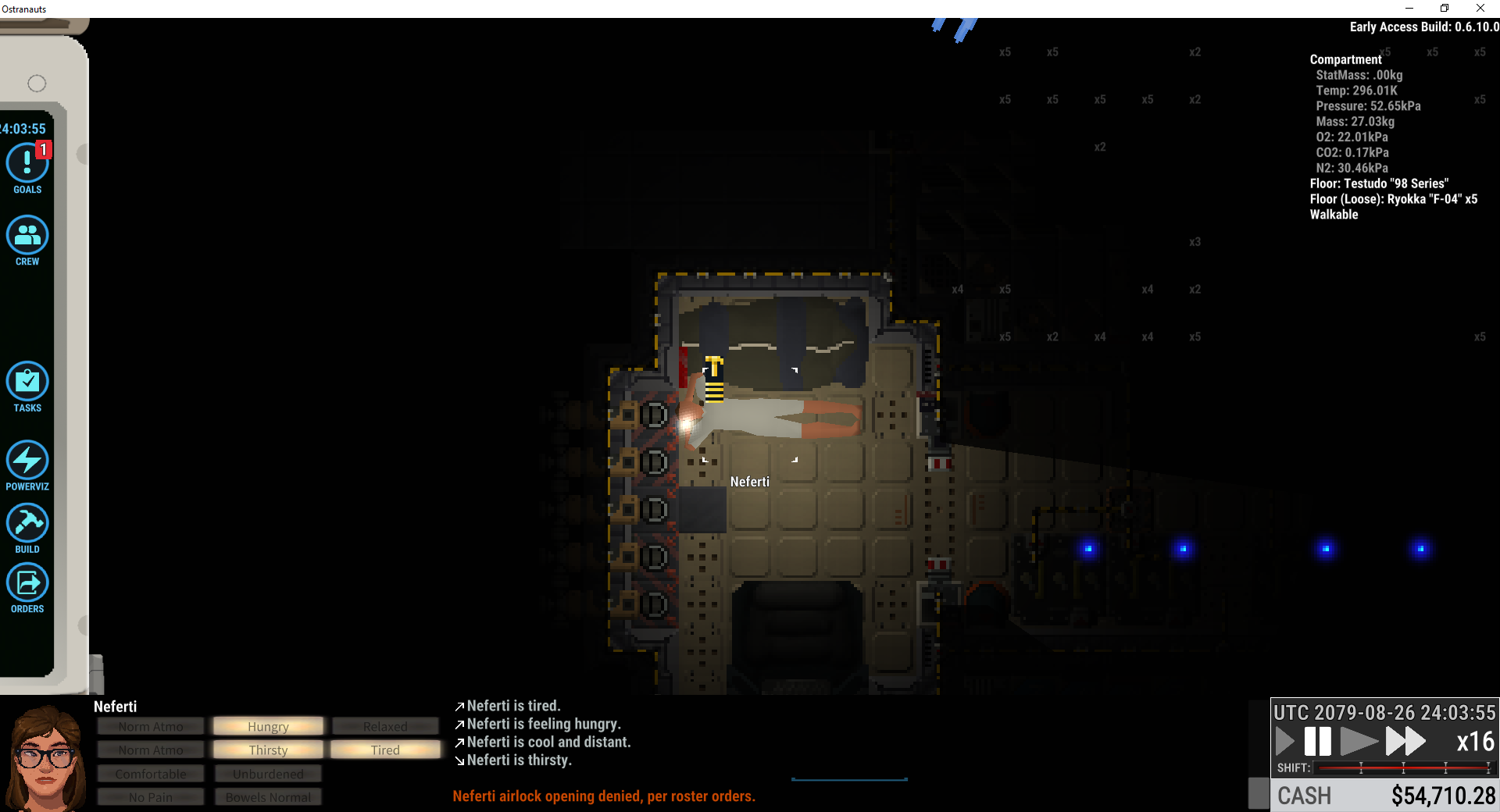 Anyway, I dusted myself off got up, and thought its time to head back to kleg as my fusion reactor was out of fuel, jumped into my Eva suit, and with my last bit of battery power made the trip back to kleg station only to be greeted by the pesky space police who love to open my exterior doors where future expansions of my ship will be and vent all my precious n2 and oxygen into space so I ran up to him to politely ask him to piss off, In HORROR I discovered that when I right-click on him I don't have the option to order him to disembark or to open the social menu the only option I had was to offer him a JOB...

To make matters worst he had already opened an exterior door and everything was depressurizing. I quickly ran over to the door to close it only to find the option to close the door is also not there anymore.

Come on, let us witness how ostranauts turned into a work of art.

Space police are indeed a bit annoying, especially since there is no combat system yet, and they can only "intimidate" them like children playing.

And they are also wearing black EVA suits. Oxygen seems to be constantly replenished and cannot kill them in a vacuum. I tested this when the bug happened.

When the battle system is released in the future, I will definitely give them the same treatment as the DMC guards.

In addition, I would like to ask how to use a fusion reactor. I don’t understand the buttons on the control panel. What do they mean, and what are they for? Can i trouble you to teach me ？

Thank you, I have to take a good look

Gahh, more bugs! Thanks for letting us know though.
Will make sure we get around to checking it out~

So to sum it up,
You slept before untime and fell out of bed.
Since then you couldn't do certain tooltips on doors and characters.
And then everything crashed.

Thanks for the report and the save game!