Played around with v0.967d and spotted a few bugs.

1.) The longer I play the more virtual memory it seems to eat up. It starts out at around 240 MB of virtual memory, and last time I quit it was up over 1.5 GB of virtual memory (seen via. Task Manager). I'd only played a couple of in-game days and hadn't explored much either. Mostly scavenging the same cities and camping in the same spot. Looks like a memory leak of some sort. This isn't new to this version, I just hadn't reported it yet with the earlier versions. (WinXP SP3, 768 MB RAM)

2.) I killed a person in combat and then had to attack them again to end combat two different times.
<!--break-->
I took screenshots and you can see that listed under the "Conditions" of the person I'm fighting is the text "Died of Cardiac Arrest". After I attack him again the combat log shows him "wake up" after he died, whereupon I beat him with two more blows during a "flurry of blows", and then the combat finally ends. It looks like the game is sometimes checking to see if the guy is dead to end the combat first, and then after that checking to see if the injuries killed him, or something like that. 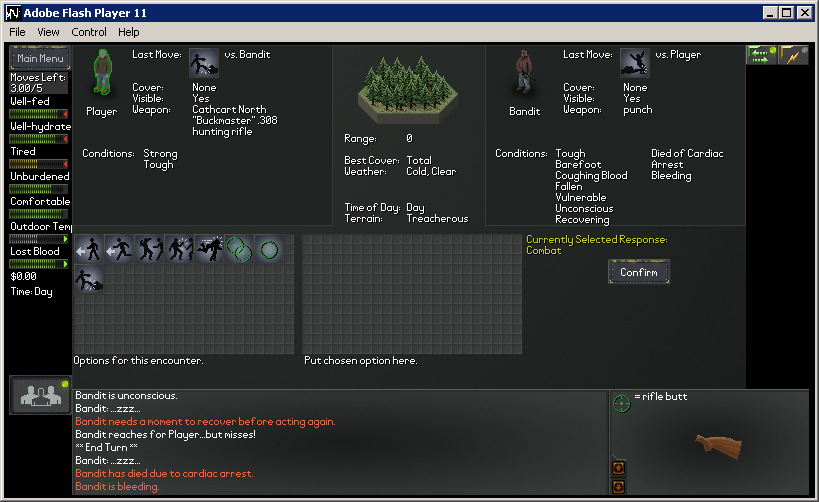 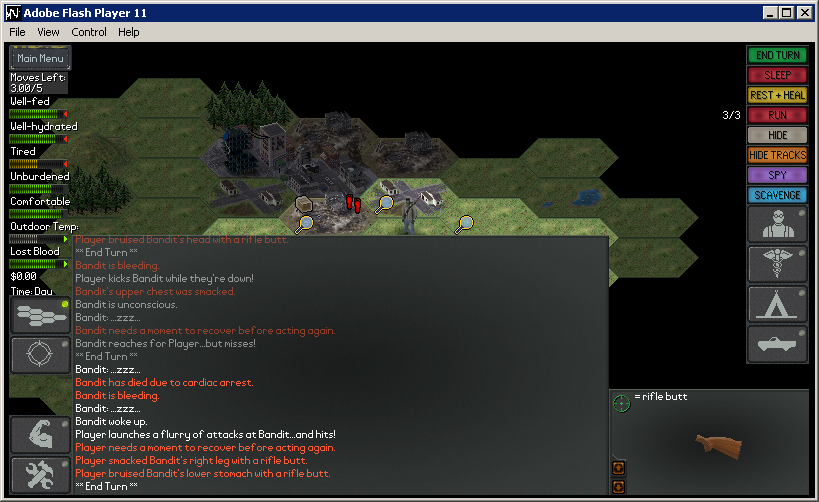 3.) I fought two bandits at the same time, killed the first, and then the second managed to die twice during a "flurry of blows". After the first blow he died of "traumatic brain injury" and after the second blow he died again of "acute bleeding in the lungs". Again I have a screenshot. 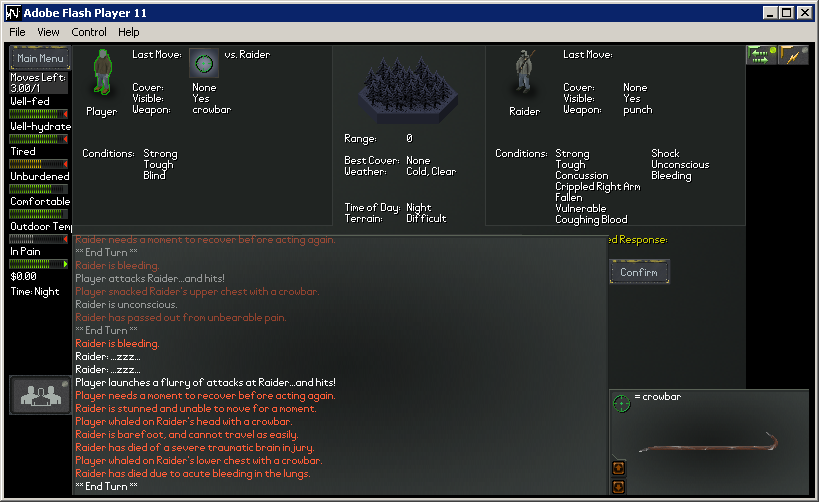 4&5.) After killing the second bandit (described above in #3) the game wouldn't end the combat, didn't give me any combat commands, and wouldn't do anything when I clicked the "Confirm" button with no combat command. That's bug #4. Then I clicked Main Menu and then Returned to the game and the buttons to look at your inventory and all that reappeared. That's bug #5, I guess, since that would allow you to cheat. In any case, it's a good thing for bug #5 there, since it allowed me to discover that bug #4 was because the ground was too full to accept all of the stuff the two bandits were supposed to drop. Once I moved a backpack from the ground to the campsite, the rest of the bandits' items dropped and combat finally ended.

These are fairly minor except for #1, as far as I'm concerned, though I guess #4 is kind of bad too if you don't/can't abuse bug #5, but it's pretty rare. The game just gets slower and slower as I play it due to #1 until it's virtually unplayable.

Also, and I know this isn't the suggestion thread, but it would be really nice if we could click the mouse-type buttons on the upper right corner of the screen in addition to using the "1" and "2" keys. A third mouse-type for trashing items would also be nice.

Apologies for mixing suggestions in here, and thanks for the game.

I've also experienced the bug, that when enemies gets allies in the midst of the fight (Melonheads especially), and you manage to kill off the first one, whilst the second escapes, you won't be able to end combat for some reason, no matter what buttons you press.

While I am not dev, I'd suspect that the first bug may be not as much caused by the game, but because of general flash qualities - in fact, I don't recall finding a flash game which with time didn't start hogging more and more system resources. Usually though, turning the whole thing off and on helps.

As for 2 - it's.. amusing. Hate of your enemies transcendents boundary of life and death.

I can as well confirm a glitch with multiple enemies. Don't know if it's spawning issue with game trying to replace/respawn someone/thing I'll defeat immediatelly and near my location or something else.

Wow, thanks for the detailed bug info!

I'll look into that memory leak. Flash uses a garbage collector, so it's natural to see a slow increase over time. However, it should drop periodically as the garbage collector cleans up unused memory. Basically, the memory usage should look like a sawtooth function.

1.5GB is definitely way larger than I'd expect, though. It could be that I've been testing the game recently on a machine with more ram, so it never dipped into virtual memory. I haven't actually tried measuring memory usage via task manager, as my IDE has a memory logger built-in. They might be reporting different values.

Also, if you hit the "\" key in the game, it'll pop up a debug overlay that shows memory usage in the top right corner. It'd be interesting to see if the usage there jives with the task manager.

Som of those combat bugs are new to me. I'll have to look into those as well. I don't think I've ever seen a case of #2 before, so I'm not sure where to start on that one. #3 is technically working as designed, just a rare case of causing two fatal wounds in rapid succession.

#4/5 is a bit weird, though. I'm not aware of any code that would prevent combat from closing due to not having room to drop loot. However, N1z0ku and Scavenger's comments about multiple enemies reminds me that there is an occasional bug I've seen where enemy reinforcements cause a null pointer. Maybe I'll fire up a game and force some melonheads to appear, and see if I can reproduce that issue.

Regarding the suggestion to make the cursor mode indicator a clickable button, I'm actually not totally against that, but I have one reservation.

Changing the move vs. take/drop indicator to be clickable (as well as hotkey-bound) seems like a no-brainer. It just improves ease of use to make that toggleable via hotkey or mouse.

However, I've actually had a lot of folks complain that the old cursor modes made it too easy to accidentally consume items, because they forgot the "use" cursor was still turned on. That's why I made it "hold 2 to use" instead of "press 2 to toggle use mode."

It's possible that those user complaints are just "doh, user error," but I'm worried they may have been bad UI design. Thoughts?

Maybe make the little lightning bolt in the cursor flash on and off while in "Use" mode? But yeah, I see how it can be tricky to balance between ease of use and not making it too easy to make a mistake. I was thinking the same thing about the possible "destroy items" cursor.

In any case, thanks for looking into this, especially the memory stuff. Next time I play I'll capture the debug info showing the memory usage when it gets large.

The click to consume mistake players make is definitely user error. It's a big yellow lightning bolt while all of the other cursor indicators are green. If I recall correctly, even the pointer itself is yellow in consume mode.

Also, just came across this bug. Was fighting a melonhead for the first time and another melonhead reinforcement showed up. I was unable to attack for several moves (was not stunned or any other sort of status that would prevent attacking), and eventually died.

I'd just scavenged a shopping cart in that hex, too. Felt like Christmas. hmmm It doesnt work if you fixed your blind eyes with normal ones and have them ripped out to get artificial ones?

Hm, that eye augmentation bug might be a typo. The game checks all the trait slots for any available space, but maybe it's only checking the first column. I'll take a look, thanks!