Continuing with the latest thrust for more content, I decided to work on a few new ranged weapons today.

One common complaint in NEO Scavenger is the relative uselessness of the Ranged skill. With only the hunting rifle in the game so far, there's little incentive to sacrifice a whole skill slot for a weapon that has such rare ammunition. I've always planned on having at least a couple more ranged weapon options, so since I'm doing new items, now seemed as good a time as any.

Most players will already be familiar with the .308 hunting rifle, at the top. I left it in the image as a reference point for other weapon sizes.

We'll start with the firearms, as I'm sure most players will care most about those :) As I've mentioned a few times before, part of my strategy in selecting which weapons to include is based on availability in near-future North America. I want there to be at least a semblance of realism in what players find, so it makes sense to choose the firearms that are most circulated in the past 100 years. (Fancier or more sci-fi stuff will likely still come later, but in lesser quantities or harder to find.)

With that in mind, the three new firearms that I've chosen are a 12-gauge shotgun, a .38 revolver, and a .45 semi-automatic pistol. Based on the data I've seen, these four weapons (including the .308 rifle) are, by far, the most widely purchased over the past century, and are the most likely to be found in circulation around Michigan.

The 12-gauge shotgun is loosely based on current-day civilian and law enforcement models, and is popular for hunting, home defense, and police use. There are two types of ammunition available for this shotgun in NEO Scavenger: 00 buckshot (clear shell), and a solid slug (red shell).

The .38 revolver is perhaps even more commonplace in America, arguably the single most circulated firearm in the country (in it's various forms). It has a long history among law enforcement personnel, and is still a popular civilian gun. It's cartridges include jacketed hollow point, and full metal jacket rounds.

Finally, the .45 semi-auto is a former military sidearm that became extremely popular among civilians for both home defense and target shooting. It's available cartridges also include JHP and FMJ flavors.

In all cases above, the chosen cartridges were based on some rough research into best-selling ammunition for each firearm.

(Before anyone asks, .22 long rifle was also a contender, but I opted not to for two reasons. 1 - There isn't a single .22 firearm that represents the lion's share in the market, so I didn't feel confident just picking one at random. 2 - I had already spent a lot of time on guns, and felt other ranged weapons needed some love :)

Apart from the firearms, many players have also requested some more primitive missile weapons. And I think this makes complete sense in a world of makeshift and salvaged tech.

Perhaps the most primitive thing on the page are the humble stone and rock. Stones are pebble-sized, and can be hurled by hand or with a sling (pictured to the stone's left). The larger rock is too heavy to be effective in the sling, but makes a passable deterrent in some situations. (And as the history of capital punishment shows, in large enough quantities, even thrown rocks can be fatal.)

I've also drawn some sprites for a bow and a few arrows. The bow is a typical store-bought, compound hunting bow. And the arrows are a mix of store-bought, carbon shaft broadhead, a makeshift glass-tip, and a makeshift metal/nail tip.

It's not a comprehensive review of ranged weapons, but it's a decent sampling. I have yet to hook these up, so that will probably be tomorrow's work. I'll probably add recipes for at least the sling and makeshift arrows, and I plan to do a little research into makeshift bows.

So far, bowyering seems a bit beyond crafting in the woods with simple tools, but there are a few more techniques I mean to look up. There isn't really time to steam and work wood over days with dogmen prowling about, but maybe there's a quick-n-dirty bow that one could knock together. Crappy by comparison, but good enough to stick a bad guy in a pinch!

Finally, a note about the artwork. I realize a number of players have graciously donated their own suggested artwork for new items and weapons. And in many cases, I think it beats the quality of my own. I just want to be clear that in no way am I refusing to use that artwork based on it's quality. It's more of a selfishness thing: I enjoy making the artwork, so I wanted to take a crack at it myself :) If nothing else, seeing your artwork inspires and educates me, so don't feel discouraged from doing more!

I hope everyone has a good night, and I'll see you tomorrow!

Looking good. I for one am

Looking good. I for one am not a huge gun person, but no use talking about that. The sprites are good looking, as for making more primitive (craftable) ranged weapons have you considered the Atlatl (http://en.wikipedia.org/wiki/Atlatl) or Bolas (http://en.wikipedia.org/wiki/Bolas)? I think having some more simple ranged weapons also opens the door for meeting tribal/savage enemies which could fill a nice niche of using ranged weaponry against you in combat.

Never seen the atlatl. Great ideas here. Might be hard to communicate to players what it is and how it works though. Bolas would be good against opponents trying to get away.

Nice sprites,I like how you did some research on what was more popular for the last century,but you forgot a crossbow(I live in Michigan and i own a rifle yes,but i use a crossbow,my neighbor uses a crossbow to,I go into a store...I see a crossbow),also with the whole river,water hex i think it would be a good idea to implement a fishing rod,or net(with limitations).

"Before anyone asks, .22 long rifle was also a contender, but I opted not to for two reasons. 1 - There isn't a single .22 firearm that represents the lion's share in the market, so I didn't feel confident just picking one at random."\

There are two that hold the majority of the market in the rifle category. The Marlin Model 60 (later the Model 795) and the Ruger 10/22. The Ruger 10/22 is a mainstay of folks getting into the firearms world, as it has a wide array of accessories, and can be broken down to some very small parts. They're also pretty inexpensive. Either one of these would be a great addition. For handguns, the Ruger MK II and MK III are the best selling handguns in .22 LR hands down. I agree with the above that Crossbows would be great.

I can cite my sources for the Ruger/Marlin, but figured that having a crap-tonne of hyperlinks and book sources might be impolite!

Thanks for the update! I'm really excited for the next release! :D

Glad the art looks okay to

Glad the art looks okay to you!

I agree that some more variety would be good. I suspect there will be another weapon batch in the future, and these are some good suggestions.

Re: atlatl and bolas, are those weapons making a comeback? I was aware of them from my D&D days, but I didn't think many folks actually knew how to use them (particularly in the Great Lakes region). I did see that the atlatl is gaining acceptance as a hunting weapon during archery seasons in a few states, however. And both are definitely achievable using the limited tools of a scavenger.

The crossbow is a good point. In fact, I think even my downstairs neighbor has one.

And now that you mention the Ruger 10/22, that does ring a bell. And it's good to "put a face to the name" on the Mark II, so to speak. I know I've seen those around, but never knew what they were called.

I've made a note to myself about these suggestions for the next batch. Thanks!

I love it. I'm typically a

I love it. I'm typically a melee person because i like to be versatile and be a more general fighter. But with a bow in the picture, as long as i can retrieve arrows, I would finally like ranged weapons.

There are a few ways to make

There are a few ways to make a bow by yourself, I've done it personally ( I don't have the money for a good compound bow, and I got sick of paying $7 every time for rental gear at my local archery place) but the method I used, of using a rasp & shaping a plank to the right size, then tillering it over several days wouldn't work. Fortunately, there are many methods of getting a quick-and-dirty bow going-
The first is to cut a hardwood sapling that is growing straight, and shape it with a knife; 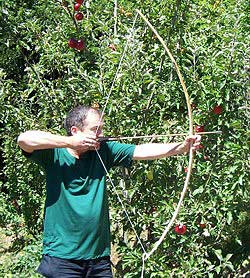 . If you can't find a suitable sapling (very much possible), you can take several smaller and thinner saplings and tie them together: this is especially common with bamboo. 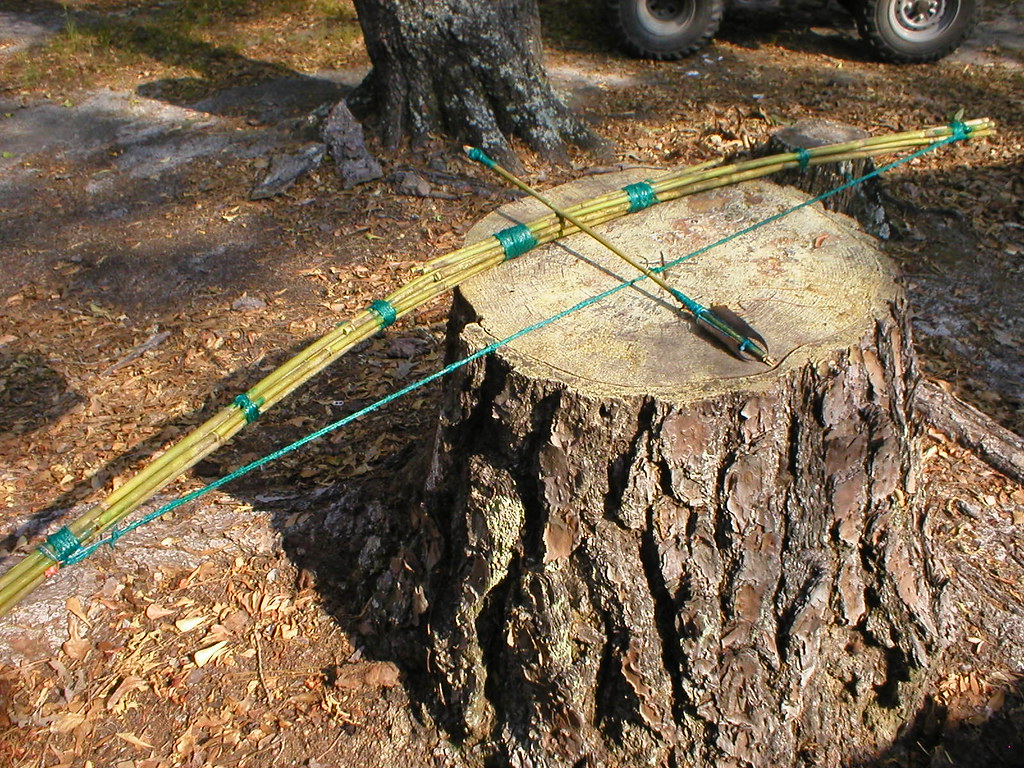 Sorry for stretching out your screen, I couldn't find a hotlinkable small size of that last pic :P

Thanks for the info! That's a

Thanks for the info! That's a good pic, too. I ended up adding a greenwood bow to the game, based on the larger sapling method you describe. When I first looked up homemade bows, I was mainly finding heat-shaped PVC variants. They're cool, but access to the tools and materials is still more limited than this.

And as for retrieving arrows, that's the plan! Worst case, the arrows will simply be dropped to the ground, for retrieval after firing (melee interference notwithstanding).